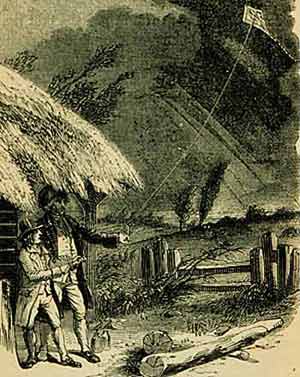 During the 18th century it began to occur to Franklin and other scientists that maybe the electric sparks they observed in the laboratory and the sparks they saw during violent storms were the same thing.

Franklin decided that the best way to test this idea would be to see if he could get lightning to pass through metal and be trapped in a Leyden jar (a capacitor). He decided to use a metal key and looked around for a way to get the key up near the lightning. In 1752 Franklin, assisted by his son, used a kite to lift the key into the sky as a storm approached. (NOTE: Franklin did not fly the kite during the actual storm; doing so is very, very dangerous and should not be attempted!). Sparks from the electrified air traveled down the string of the kite and charged the attached Leyden jar. This was an important scientific discovery—that lightning is really a stream of electrified air, known today as plasma. Franklin’s kite flying is one of the most famous scientific experiments in history. His experiment proved that lightning is really the same electricity he observed in a spark in his laboratory, but many, many times more powerful.

Franklin was a noted scientist in his day and went on to learn many things about electricity. Franklin even named some of the terms for electricity we still use today, such as battery, conductor, condenser, charge, minus, and plus. But Franklin was a practical man as well and looked for ways of making use of the knowledge he had gained from his experiments. One of the most famous is the lightning rod. In those days, buildings were made of wood, as were ships. Tall buildings, such as churches with steeples, and boats with their tall masts, were constantly in danger of being struck by lightning and burning down. Franklin reasoned that just as the electric sparks in his laboratory could be drawn off by a pointed conductor, so a large metal point connected to the ground would safely draw away the lightning. In 1753 he published his idea in his Poor Richard’s Almanack, (remember, Franklin was also a writer and printer), and several of his “lightning rods” were installed in Philadelphia. In 1760, a building was saved from a direct lightning hit, and the invention spread to England and eventually to the rest of the world. Because of this invention, Franklin is remembered not just as an early electrical scientist, but as the first “electrical engineer.” In fact, Franklin’s kite is still the symbol of the Institute of Electrical and Electronics Engineers, the world’s largest professional technical society.

Retrieved from "https://ethw.org/w/index.php?title=Kite_Experiment&oldid=154696"
Categories:
This page was last edited on 12 April 2017, at 13:51.
About ETHW
Policies and disclaimers