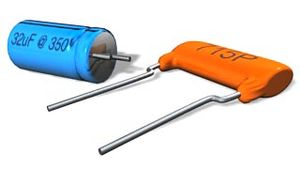 These are examples of modern capacitors. They measure about an inch long and might be found in radios or televisions. Capacitors come in all sizes, from car-size ones that are used in electric power distribution to microscopic ones built into integrated circuits.

A capacitor is a device for temporarily storing electric charge. What is considered to be the very first capacitor was called the Leyden jar, which was invented by Pieter van Musschenbroek in 1746 at the University of Leyden (or Leiden) in Holland. It was a glass jar wrapped inside and out by a thin metal foil. The outer foil was connected to the ground, and the inner foil was connected to a source of electricity such as an electrostatic generator. Although how it works was not understood at the time, experimenters discovered that the Leyden jar seemed to store an electric charge even after it was disconnected from the generator. Like many early electrical devices, there was no particular use for the Leyden jar at first, other than to allow scientists to do a greater variety of electrical experiments. Benjamin Franklin, for example, used a Leyden jar to store electricity from lightning in his famous kite flying experiment in 1752. By doing so he proved that lightning was really electricity. 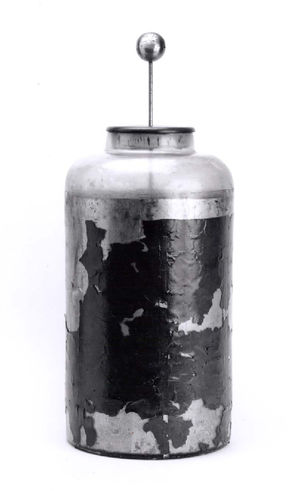 Capacitors such as a Leyden jar consist of layers made of an electrically conducting material (such as metal foil) separated by layers of a nonconducting material (glass in the case of the Leyden jar, but it can also be wax, mica, oil, paper, tantalum, plastic, ceramic material, or even air). If an electrical voltage is applied to the layers of a capacitor, the plates will become charged, one positively and one negatively. If the externally applied voltage is then removed, the plates of the capacitor remain charged, and the presence of the electric charge induces an electrical potential between the plates. Today’s capacitors are used for a wide variety of purposes in electric power systems, radio receivers, computers, and nearly every other electrical device. They range in size from the size of a refrigerator to the microscopic capacitors built into integrated circuits. The capacity of the device for storing electric charge (called its capacitance) can be changed by changing the area of the plates, by increasing or decreasing their separation, or by using different kinds of materials for the non-conducting layers.


Capacitors are often given names to suit their applications eg:

In 1745 the Leyden jar was competitively invented by Ewald Jurgen von Kleist - 4 Nov 1745. Pieter van Musschenbroek produced the first working example in Jan 1746, with the name coming from Leiden University. In 1747 William Watson discharges a Leyden jar through a circuit and comprehends electric current.

The unit of capacitance was known as the "Jar" until 1872, when the SI unit of "Farad" was assigned. (Other units were assigned at this time, volt, ampere, coulomb, ohm and farad.)   The term capacitor only became popular around the 1950's, and prior to that it was known as a condensor.

All practical realizations of the capacitor have some series resistance as well as leakage resistance which together form the 'equivalent circuit' used in detailed circuit analysis. The effect of these resistances is measured as the 'Loss Factor', and can manifest itself as heating the component. In a tuned circuit, these resistances contribute to the "Q" (quality) factor.

The electrical current through a capacitor is defined and described in detail as displacement current, originally theorized by Maxwell.

Sprague Electric: An Electronic Giant's Rise, Fall, and Life after Death -- a history of a capacitor manufacturing company, with a lot of detail on how capacitors, condensers, and other electronics work

Retrieved from "https://ethw.org/w/index.php?title=Capacitors&oldid=177488"
Category:
This page was last edited on 29 October 2019, at 18:57.
About ETHW
Policies and disclaimers