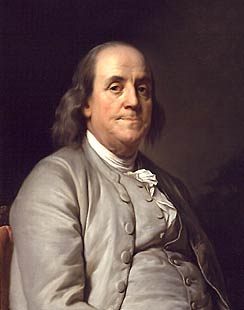 As a printer, writer, inventor, scientist, diplomat, postmaster, and businessman, Benjamin Franklin was one of the most versatile and famous men of colonial America and the new republic.

The youngest son of Josiah Franklin and Abiah Folger, Benjamin initially trained to be a clergyman. Education in colonial New England was expensive though, and by the age of ten, Benjamin left formal schooling and began work as an assistant in his father’s shop. Later, Benjamin became a printer’s apprentice in his older brother James’s print shop. While working there Benjamin borrowed books from his friends and taught himself arithmetic, grammar, philosophy and navigation.

After a disagreement with his brother Benjamin left Boston. Just seventeen years old and on his own, he arrived in Philadelphia in 1723 and found a printing job. Just a year later, in 1724, Benjamin left Philadelphia for England where he hoped to make enough money to buy printing equipment and to go into business on his own. When he earned enough money, he returned to Philadelphia, set up his own printing shop and began publishing his own newspaper, The Pennsylvania Gazette.

After returning to Philadelphia, Benjamin married Deborah Reed. They ran a shop that sold sundry items. Benjamin also continued his successful printer’s business and was appointed Public Printer for Pennsylvania, Delaware, Maryland, and New Jersey. He became so successful that at age 42 he sold his business and devoted himself to his other interests, especially his scientific experiments.

Franklin was an experimenter and inventor all his life. He was fascinated with electricity. He developed much of the basic vocabulary of electricity, including terms like “battery,” “conductor,” and “electrician.” He also conducted many experiments. His most famous was his 1752 kite flying experiment. The experiment proved lightning is electricity. He followed this discovery by inventing lightning rods. These are tall iron rods mounted to the sides or tops of buildings. They attract lightning and direct it into the ground, thereby reducing the risk of fire. His reputation was made when he published his work on electricity in Experiments and Observations on Electricity Made at America in Philadelphia. Excited scientists in Europe rushed to try his experiments. Unfortunately, one Swede was struck by a bolt of lightning and killed when he tried a kite experiment of his own.

In addition to science, Franklin had many interests. He invented bifocals, a new ship anchor, a wood stove, an armchair that could be turned into library steps, and many other things. He also started the first public library in America and supported education for everyone, including women and African-Americans. He helped found the American Philosophical Society in 1744, an organization whose members shared new information of all kinds, especially about the natural world. Beginning in 1732 he achieved great success with Poor Richard’s Almanack, a yearly publication that became the most popular reading material in the colonies after the Bible. The mottoes in the almanac, proverbs such as “Early to bed and early to rise makes a man healthy, wealthy, and wise,” expressed his ideas about improving oneself. In addition to these activities, Franklin was also involved in the fire company, postal service, and militia.

By 1785 Franklin belonged to more than twenty scientific societies and was the best known American in Europe. This fame made him a natural choice to represent Pennsylvania in England. While in London, he set up electrical machines in his boarding house and attracted many visitors from all over the continent. With occasional return visits to Philadelphia, he spent most of the years between 1757 and 1774 in England as the voice of the American colonies. Not until Deborah died in 1774 did he go back to Philadelphia with the intention of staying in America. By then his staunch support of the colonies and the developing American Revolution made him an unwelcome guest in England.

The deep respect Franklin commanded as a scientist, inventor, and diplomat extended to his political career late in life. He was the oldest member of the Second Continental Congress, and in 1776 he traveled to France on a successful mission to convince the French to support the American cause. He remained in Paris for the rest of the war and helped oversee the 1783 peace treaty that recognized America’s independence. In 1785 he returned to Philadelphia and two years later despite poor health, he served as a delegate to the Constitutional Convention. When he died in 1790, both the House of Representatives of the United States of America and the National Assembly of France declared themselves to be in mourning.

Retrieved from "https://ethw.org/w/index.php?title=Benjamin_Franklin&oldid=174503"
Categories:
This page was last edited on 25 March 2019, at 19:33.
About ETHW
Policies and disclaimers