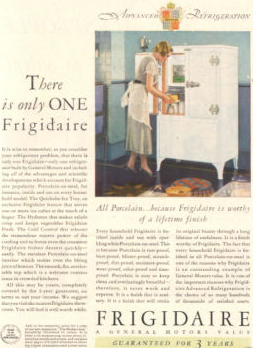 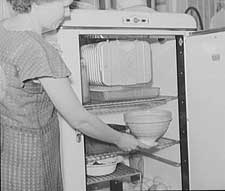 In the late 1800s the first “mechanical” refrigerators were introduced to businesses such as restaurants and grocery stores. These machines used compressed ammonia or other gasses to freeze water into ice without relying on nature. At first these refrigerators were driven by steam engines, but later they were run by an electric motor. Scaled-down versions became available for home use around 1913.

The key to refrigeration is the fact that an evaporating liquid tends to draw away heat from its surroundings as it evaporates. You can feel the effect of this on your skin if you wet it and then stand in a breeze. The wind accelerates the evaporation of the water, so your skin will feel cooler than it would if it were not wet. A refrigerator takes advantage of this principle, too.

Hidden inside the walls of the refrigerator is a network of tubes and reservoirs containing a special refrigerant liquid which evaporates at a very low temperature. If you removed it from the sealed system, it would disappear before your eyes as it changed from liquid to gas. A motor-driven compressor pumps the liquid from one area, called the condenser (usually located underneath or in back), to another area called the evaporator. The room inside the evaporator is larger than that in the condenser, and the refrigerant instantly evaporates because it has lots of space to expand. As it evaporates, it sucks in heat from inside the refrigerator, making the inside of the refrigerator cool. Then the gas is forced into the condenser under pressure, where it once again becomes a liquid. As it does so, it expels the heat that it collected, usually into the surrounding air. A fan blows air on the condenser to draw the heat away and into the room. Then the cycle begins again until a thermostat inside the refrigerator switches off the motor.

In 1928, the Frigidaire company patented the use of a new gas, a non-toxic, non-flammable chlorofluorocarbon which went under the trade name “Freon”. Refrigerators used this refrigerant until the 1980s, when it was banned. By then it was discovered that CFCs such as Freon had created serious environmental problems and contributed to global warming. Freon was replaced by other refrigerants.

The production of refrigerators stood at just 5,000 units in 1921. Within about a decade the numbers had grown to more than 6 million in the United States alone. However, at that time sales dropped. Part of the reason was that the Great Depression made it difficult for people to buy expensive items. Then, refrigerator production was cut off during World War II so that factories could temporarily convert to the production of armaments. There was another reason, however. Few homes had adequate wiring to allow an electric refrigerator. Only with the post-1945 suburban housing boom did refrigerator usage become universal.

The refrigerator dramatically affected the way foods were purchased. Fewer people needed a refrigerator before the 1940s because the places they lived were usually near the small groceries where they shopped. People bought smaller quantities of fresh foods several times a week, and for this purpose an icebox was adequate. Foods like milk, eggs, and meat were usually delivered to the house every few days. After World War II, as millions of Americans moved to the new suburbs, and small corner groceries were replaced by supermarkets, people began to buy larger quantities of perishable foods more often. The refrigerator made it possible to store fresh foods for a much longer time. Now, instead of buying a quart of milk every few days, a household could buy a full gallon and keep it in the ‘fridge.

In some kinds of refrigerators, there is no motor or compressor. From the 1930s to the late 1950s, the “gas” refrigerator provided an alternative. In a gas refrigerator, the refrigerant circulates from the condenser to the evaporator and back all on its own. Inside, a tiny plume of burning propane, natural gas, kerosene, or other fuel heats the liquid refrigerant, causing it to evaporate even more quickly and forcing it into the evaporator under high pressure. This provides the same thing as the pumping action of a compressor.

In the 1980s, refrigerators became available which do not need a refrigerant at all. They use a curious feature of certain electronic devices called the Peltier effect. A Peltier device is somewhat like a specialized kind of transistor, but instead of being an amplifier, it has the odd property of getting cold when a current passes through it. But neither the gas nor the electronic refrigerators are often used today.

Retrieved from "https://ethw.org/w/index.php?title=Refrigerator&oldid=154724"
Categories:
This page was last edited on 12 April 2017, at 13:51.
About ETHW
Policies and disclaimers