The plaque can be viewed in the Bletchley Park Museum, in Bletchley, Milton Keynes, U.K. 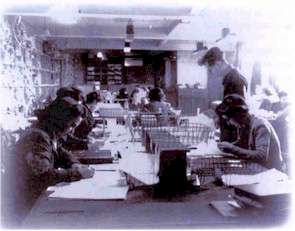 The History of Bletchley Park
By Michael Smith

The arrival of "Captain Ridley's Shooting Party" at a mansion house in the Buckinghamshire countryside in late August 1938 was to set the scene for one of the most remarkable stories of the Second World War.

They had an air of friends enjoying a relaxed weekend at a friend's country house. They even brought with them one of the best chefs at the Savoy Hotel to cook their food.

But the small group who turned up at Bletchley Park were far from relaxed. They were members of the Government Code and Cypher School, a secret team of scholar turned code breakers. Their mission: to crack the Nazi codes.

The most famous of the code and cyphers to be broken at Bletchley Park was the enigma machine cypher. But there were also a large number of lower-level German systems to break, not to mention those of Hitler's allies.

The Poles had broken Enigma in 1932, when the encoding machine was undergoing trials with the German Army. But when the Poles broke Enigma, the cypher altered only once every few months. With the advent of war, it changed at least once a day, giving 150 million possible settings to choose from. The Poles decided to inform the British in July 1939 once they were unable to break Enigma any longer. As more and more people arrived to join the code breaking operations, the various sections began to move into large pre-fabricated wooden huts set up on the lawns of the Park. For security reasons, the various sections were known only by their hut numbers. You can see the five surviving huts on your tour of the grounds of Bletchley Park.

The first break in Enigma came on 20th January 1940, when the team working under Dilly Knox, with the mathematicians John Jeffreys and Alan Turing, unravelled the German Army administrative key that became known at Bletchley Park as "The Green". Encouraged by this success, the code breakers managed to crack the "Red" Enigma used by the Luftwaffe liaison officers coordinating air support for army units.

Gordon Welchman, soon to become head of the Army and Air Force section, devised a system whereby his code breakers were supported by a group of Army and RAF officers, based in a neighbouring hut, who turned the de-cyphered messages into intelligence reports.

Secrecy shrouded the fact that Enigma had been broken. To hide this information, the reports were given the appearance of coming from an M16 spy, code named Boniface, with a network of imaginary agents inside Germany.

While this was pure fiction, there was a real network monitoring the Germans' very move. The 'Y' Service, a chain of wireless intercept stations across Britain and in a number of countries overseas, listened in to the enemy's radio messages. Thousands of wireless operators, many of them civilians but also Wrens, WAAF personnel and members of the ATS, tracked the enemy radio nets up and down the dial, carefully logging every letter or figure.

The messages were then sent back to Station X to be decoded and fitted together like a gigantic jigsaw puzzle to produce as complete a picture as possible of what the enemy was doing.

The system was first put to the test in April 1940 when the Germans invaded Denmark and Norway. The Phoney War had come to an end. But the code breakers were ready. Within a week, Bletchley Park had broken the invaders' Enigma 'Yellow' cypher.

The intercepted messages told the code breakers virtually every detail of what the advancing Germans were doing. Nothing had prepared them for this amount of material. The intelligence officers in Bletchley Park were overwhelmed with trying to make sense of the mass of new code names, titles of German units, etc. with which they were suddenly presented. And in any case no provision had been made for the dissemination of their intelligence information to British commands with the degree of security that was essential in dealing with such a sensitive source. So no use could be made of the decrypts during the Norwegian campaign.

The code breakers began working around the clock to send the intelligence they were producing to London. Special Liaison Units were set up to feed the Bletchley Park intelligence to commanders in the field, first briefly in France in May 1940 and then in North Africa and elsewhere from March 1941onwards.

Unfortunately, the generals did not trust M16 or its spies and, unaware that the news of what the enemy was doing was coming straight from the enemy's mouth, they ignored it. Nor was this the only problem faced by Bletchley Park. Despite the code-breakers' success in Norway, they had lost the all-important Red cypher. But in May 1940, using a brilliant system devised by a young student called John Herivel, they succeeded in breaking it again.

This was one of the most important points of the war. The air liaison nets that used the Red cypher gave an exceptionally good insight into the major German plans and operations but little use could be made of it during the fighting in France. The process of breaking Enigma was aided considerably by a complex electro-mechanical device, designed by Turing. The Bombe, as it was called, ran through every possible permutation in order to try to determine the settings in use. The Bombes were operated by Wrens, many of whom lived in requisitioned country houses such as Woburn Abbey. The work they did in speeding up the code breaking process was indispensable.

In de-cyphering the Naval Enigma, Turing was joined by, among others, Hugh Alexander, a British chess grandmaster, who was to become one of the most brilliant code breakers at Bletchley Park. The intelligence they produced was passed to the Admiralty via the Z Watch in the Naval Section. But in the early days, they struggled to get the naval commanders to take it seriously.

However, a series of spectacular successes turned things around for the code breakers. Throughout the First Battle of the Atlantic, they helped the Admiralty to track the U-Boat wolf packs, considerably reducing the German Navy's ability to sink the merchant navy ships bringing vital supplies to Britain from America.

Nor were the Germans the only targets for Station X -- the code breakers were able to monitor the Japanese preparations for war. The suggestion that they knew of the imminent attack on Pearl Harbor but kept quiet in order to ensure America joined the war is nonsense. But their expertise undoubtedly gave great assistance to the American code breakers.

The German attack on the Soviet Union in June 1941 brought some of the most distressing messages Station X was to break: the details of the massacre of tens of thousands of Jews. It is not true, as has been suggested, that nothing was done about this for fear of giving away the Enigma secret. Churchill actually risked giving the secret away by publicly denouncing the killings as "a crime without a name". He also ordered Station X to assign someone to collect evidence from the broken messages for use as evidence in the war crimes trials that were to follow the German defeat.

The code breakers' many successes also included the North Africa Campaign, when they enabled the Royal Navy to cut Rommel's supply lines and kept Montgomery informed of the Desert Fox's every move.

One time when they were in serious difficulties was in early 1942 with the U-Boats' introduction of a far more complex Enigma cypher. By the end of 1942 they had again broken the code. Yet Bletchley Park's greatest success was still to come, with the construction by Tommy Flowers of Colossus, the world's first programmable electronic computer to help to break the Germans' teleprinter cyphers. Flowers and his team of Post Office engineers built Colossus in December 1943, allowing Station X to provide the officials planning for the invasion of Europe with unprecedented detail of the German defences.

The code breakers made a vital contribution to D-Day in other ways. The breaking of the cyphers of the German Secret Intelligence Service allowed the British to confuse Hitler over where the Allies were to land.

His decision to divert troops away from the Normandy beaches undoubtedly ensured the invasion's success. But even as the Allied troops waded ashore, a new threat was looming and attention was being given to the role of the code breakers in the post-war era.

After the war finally came to an end, a number of staff continued elsewhere to use the remarkable expertise they had built up at Bletchley Park to break other countries' cyphers, but under a new name, the Government Communications Headquarters (GCHQ).

The country house atmosphere had gone for good to be replaced by a highly efficient intelligence-gathering machine aided by the fact that the wartime alliance with the Americans continued through the Cold War and beyond.

The 12,000 people who worked at Station X did not win the war, but they certainly shortened it, saving countless lives on both sides of the conflict and their legacy lives with us today with the computer technology that dominates our lives.

Their work must surely never be forgotten.

Michael Smith is the Defence Correspondent of the Daily Telegraph. He is author of the number one best-seller Station X: The Code Breakers of Bletchley Park, and The Emperor"s Codes: Bletchley Park and the Breaking of Japan"s Secret Cyphers.