The modern digital computer differs from other calculating machines by having an internal memory for storing a program and data, allowing both program and data to be changed dynamically during computation. Technically, such a machine is called a stored-program computer or a universal computer. 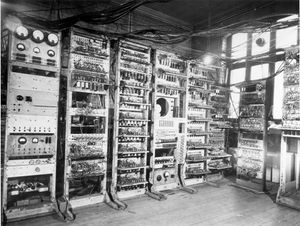 The first of these universal computers to come into operation was the Small-Scale Experimental Machine (SSEM, or Baby) at Manchester University, which first ran a small program on the morning of 21st June 1948.[1] Devising suitable storage technologies was the big challenge for all early computer pioneers. At the heart of the Manchester SSEM was a novel form of RAM (Random Access Memory).[2] The Manchester storage system was electrostatic, depending upon charge storage within a cathode ray tube (CRT). Unlike other attempts to devise CRT-based memory systems, the Manchester scheme (known as the Williams-Kilburn tube) was cost-effective and was subsequently employed by several other early computer systems including the IAS computer at Princeton and IBM’s 701.

The theoretical possibilities of the stored-program concept had been described in a paper entitled On computable numbers, with an application to the Entscheidungsproblem,[3] written in 1936 by the English mathematician Alan Turing. There were more urgent things to think about during the Second World War but, by 1945, there was a strategic need to re-examine the stored-program concept and turn it into a practical machine. A group at the Moore School of Electrical Engineering, University of Pennsylvania, produced a report on EDVAC (Electronic Discrete Variable Automatic Computer) in June 1945.[4] Alan Turing, working at the UK’s National Physical Laboratory (NPL) produced a report for a Proposed Electronic Calculator, later called ACE (Automatic Computing Engine), by the end of 1945.[5] Turing’s ACE report referenced the EDVAC document but took the ideas further. However, neither the Pilot version of ACE nor EDVAC were to become operational computers until much later (1950 and 1951 respectively).

By the end of 1949 there were just two prototype stored-program computers in hesitant operation in the UK (the Mark I (enhanced SSEM) at Manchester University[6] and the EDSAC at Cambridge University),[7] with another in the USA (SEAC) and one in Australia (CSIRAC). Of these four pioneering machines, the most user-friendly was the EDSAC computer at Cambridge University. Cambridge became very influential in promoting software excellence.[8] 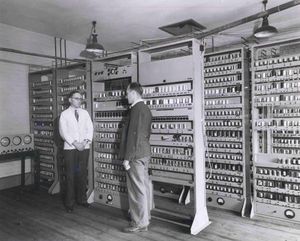 Most of the early UK and US computer projects benefited from wartime technological developments. Figure 3 shows the flow of electronic know-how within the UK from 1945 to 1955, by which time digital computers were firmly established in the market place. The labelled white boxes in Figure 3 represent nineteen early British computers.[9] All were of the stored-program type, except for OEDIPUS and the Elliott 152 which were adapted for special (classified) purposes.[10]

The world's first commercially-available computer is believed to have been the Ferranti Mark I,[11] delivered in February 1951 by Ferranti Ltd., a British electrical company founded in 1882. The Ferranti Mark I was based on the Manchester University Mark I prototype.[6] Nine Ferranti Mark I and Mark I* computers were delivered between 1951 and 1957.[12] Another early player in the UK market place was the electrical instrument company Elliott Brothers (London) Ltd., founded in 1804. The Elliott 401 was delivered to an end-user in March 1954. This was followed by the Elliott 402, of which ten were delivered between 1955 and 1959.[12] The design of Turing’s Pilot ACE computer was taken by the English Electric Company and turned into the DEUCE production version,[13] of which about 33 were delivered between 1955 and 1960.[12] All these early Ferranti, Elliott and English Electric machines were used for scientific and engineering applications. 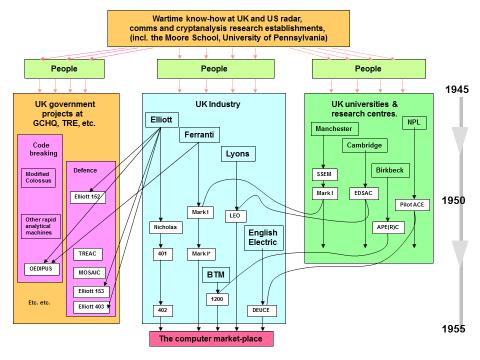 Figure 3. The influence of war-time electronic know-how on the development of early British computers. 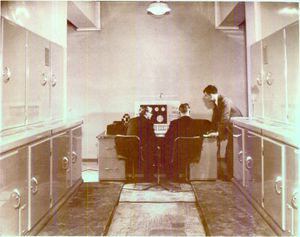 Figure 4. The Ferranti Mark I computer at Manchester University in 1951. The person at the right-hand side is Alan Turing.

The first computer to undertake business data processing was probably LEO (Lyons Electronic Office), based on the design of the Cambridge University EDSAC and developed in-house by the catering and bakery firm of J Lyons & Company, founded in 1887.[14] LEO ran its first simple clerical program in April 1951. In 1955 Lyons established a subsidiary company, LEO Computers Ltd., which produced LEO II – an enhanced version of LEO that was four times as fast. Eleven LEO II computers were delivered between 1957 and 1961.[12] Meanwhile the British Tabulating Machine Company, long-established makers of punched-card equipment, took the experimental computer designs of Andrew Booth at Birkbeck College, London, and produced the Hollerith Electronic Computer, HEC.[15] Over 80 versions of HEC and its successor the BTM 1200 series, were delivered to customers between 1955 and 1962.[12] 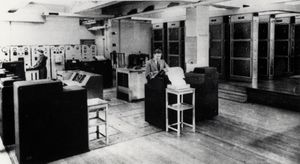 The UK market was slow to take off. Most of the pioneering digital computers were, by modern standards, rather large, expensive and unreliable. Most could only be programmed in machine code. Manufacturers provided very little software.

In the early 1950s, analogue computers were often preferred, over digital computers, for applications such as defence and process control where speed and reliability were required. In the business world, electro-mechanical punched-card equipment was the tried and trusted means for office data processing for many commercial enterprises right up to the end of the 1950s.

In 1951 Ferranti Ltd. appointed Vivian Bowden as the company's first computer salesman. Professor Douglas Hartree of Cambridge, a respected advocate of computing, could not understand Ferranti's plans. In September 1951 Hartree said to Bowden: “We have a [digital] computer here at Cambridge; there is one at Manchester and one at the NPL. I suppose there ought to be one in Scotland, but that's about all”[16]

In a modest way, British computer companies also began exporting their machines abroad. Ferranti installed computers in Toronto (1952), Amsterdam (1954) and Rome (1955); Elliott installed its first export to Paris in 1955. As far as is known, no British-designed computer reached the USA until Elliott installed an 802 in Chicago in 1958. The first non-British computer to be installed in the UK was an IBM 650 in October 1956 and by 1962 IBM had captured 18 per cent of the UK's market.[17]

Amongst the early (pre-1959) British computer manufacturers were:

By 1968 the main computer interests of all the above five companies had been merged into a single enterprise, ICL (International Computers Ltd).[18] There were many smaller UK computer manufacturers who existed independently but none had the market strength of ICL. ICL traded until 2001, when it was swallowed up by Fujitsu.

Some of the ideas introduced by the early British computers have remained with us ever since. Other ideas have been superseded by technological advances. Here are some notable British world ‘firsts’ from the early years of stored-program computers.

If one were to rank the above innovations in importance historically, perhaps Index Registers and Virtual Memory would stand out for their lasting impact on computing world-wide.

Retrieved from "https://ethw.org/w/index.php?title=A_Brief_History_of_Early_British_Computers&oldid=119651"
Categories:
This page was last edited on 24 August 2015, at 13:58.
About ETHW
Policies and disclaimers