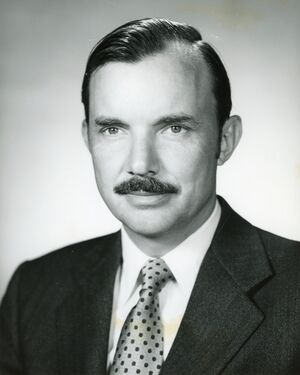 Dr. Lewis M. Branscomb, was vice president and chief scientist of International Business Machines Corporation, and was responsible for guiding the corporation's scientific and technical programs to ensure that they met long-term needs. He joined IBM as chief scientist in May 1972 and was elected an IBM vice president the following month.

Dr. Branscomb was graduated from Duke University summa cum laude in 1945 and was awarded his M.S. and Ph.D. degrees in physics by Harvard University in 1947 and 1949. During his career, he has taught at Harvard, University College, London, the University of Maryland, and the University of Colorado. Dr. Branscomb has received the Rockefeller Public Service Award and the District of Columbia Junior Chamber of Commerce's Arthur Flemming Award. He also has received the Samuel Wesley Stratton Award and the Gold Medal for Exceptional Service from the United States Department of Commerce. He holds honorary doctor of science degrees from Duke, Western Michigan and Rochester Universities.

He served on the board of directors of the American Association for the Advancement of Science, the board of trustees of the Rand Corporation, and was chairman of the Commission on Atomic and Molecular Physics and Spectroscopy of the International Union of Pure and Applied Physics. Dr. and Mrs. Branscomb have two children.

Retrieved from "https://ethw.org/w/index.php?title=Lewis_M._Branscomb&oldid=196282"
Categories:
This page was last edited on 7 November 2022, at 20:34.
About ETHW
Policies and disclaimers