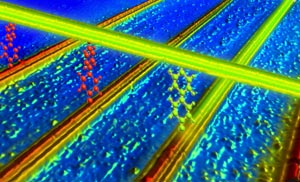 For decades computer chip designers have been desperately trying to pack more and more components into the same small amount of space. As they begin to reach to the absolute limits of 20th century technology, they are hoping the new generation of nanotechnology will save their skins in the 21st century. While one of the eventual goals of nanotechnology is finding a new way to build complete memory and processor chips, researchers have at least begun to find ways to make the individual components of those chips, ranging from wires and resistors to transistors, diodes, and even the basic “gate” circuits on which all digital electronics are based. In 1997 researchers at Arizona State University announced that they could build a three-molecule photovoltaic device to convert light into tiny amounts of electric current. The researchers theorized that these could be incorporated into chips to perform tasks such as “translating” digital data from fiber-optic cables into the electrical pulses suitable for computer chips. In 1996, Professor James Tour of the University of South Carolina demonstrated his new nanowire, made from long chains of a compound called phenylene. At Stanford University Hongjie Dai also demonstrated the use of carbon nanotubes as conducting wires in 2000. Dai’s team later showed how bending the nanotubes transformed them from conductors to resistors, suggesting another useful possibility for them.

Molecule size switches may replace the (relatively) much larger silicon electronic switches currently used in microprocessors and memory chips. Dr. Mark Reed and his colleagues at Yale University demonstrated one of the first of these in 1999, when they showed how a small cluster of molecules based on the chemical benzene could switch on or off a minute electric current when connected into a circuit in a certain way; in other words, they demonstrated a molecule-size version of the switch that forms the basic building block of computer chips. The new switches also stayed on or off for up to 10 minutes after power was cut off. This indicates that they might be useful as memory units in cell phones, PDAs, and other systems that run on batteries. Since that time, several new types of molecules have been used in circuits to act as switches, and “gate” circuits consisting of several of these transistors have been constructed, but it remains to be seen how multiple switches, perhaps connected by nanowires, can be assembled together to create more than the simplest of circuits.

Since about 2003, most of the excitement has been about carbon nanotube switches. For example, Apparao M. Rao at Clemson University and Prabhakar Bandaru at the University of California, San Diego recently demonstrated a new kind of “Y” shaped carbon nanotube. When its three arms are connected to a special circuit, the nanotube acts much like an ordinary silicon transistor, where a tiny voltage applied to one of the arms can switch on or off a large current flowing through the other two. IBM researchers and numerous others have also demonstrated ways to use carbon nanotubes or other molecules to build logic gates. These gates are currently made by combining one or more transistors into a functional electronic circuit that can make simple yes-no logic decisions. But engineers still need to find a way to connected millions of these individual gates together to form a complete memory chip or microprocessor. Although they are still a long way off from a functional nano-chip, they believe progress will be swift and that the age of the silicon chip is drawing to a close.

Retrieved from "https://ethw.org/w/index.php?title=Nanoelectronics&oldid=120165"
Categories:
This page was last edited on 17 September 2015, at 17:37.
About ETHW
Policies and disclaimers