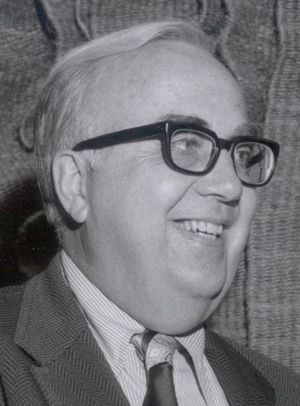 Dr. C. Lester Hogan was vice chairman of the board of directors of Fairchild Camera and Instrument Corporation. He joined the company as president, chief executive officer and a director in 1968 and was elected to his present position in July of 1974.

Born in 1920 in Great Falls, Montana, Dr. Hogan was graduated from Montana State University in 1942 with a B.S. degree in chemical engineering. After serving three years as a U.S. Naval officer during World War II, he entered Lehigh University, where he earned M.S. and Ph.D. degrees in physics.

Dr. Hogan first came to world attention in scientific circles after joining Bell Laboratories, where he performed experiments which demonstrated nonreciprocity at microwave frequencies and carried out a theoretical analysis substantiating the experiments. This work, published in 1952. has become a classic reference. Subsequently he joined the Harvard University faculty and was awarded the Gordon McKay Professorship of Applied Physics.

Moving from the academic to the business community, Dr. Hogan from 1958 to 1968 served as general manager of the Motorola Semiconductor Products division and, during that period, became executive vice president of the parent company. At Motorola he built the division from what was essentially a laboratory operation into a major semiconductor company.

When he joined Fairchild in 1968. Dr. Hogan's prime mission was to provide a growth stance for the company and return it to a profit-making position. He engineered a comprehensive management realignment and brought in many new executives with outstanding credentials. Professional management techniques were introduced. and a major expansion program was initiated. As one result, sales of the company approximately doubled-from $198 million in 1968 to $384 million in 1974.

During his seventeen years of management in the semiconductor field, he has directed his companies to significant contributions and innovations in the semiconductor art. These include the first commercially available epitaxial transistors in 1960 at Motorola; the first under the hood application of semiconductors in the automotive field with the production of the alternator rectifier, and Motorola's highly mechanized transistor and rectifier production lines. At Fairchild, he directed the development of the Isoplanar process in both bipolar and CMOS circuits; the first commercially available CCD imaging device; subnanosecond ECL; high energy ignition systems for automobiles; and many other important products.

Dr. Hogan has held key posts in most major professional scientific organizations. A Fellow of the IEEE, he served on the Advisory Council of the Electrical Engineering Department of Princeton University from 1957 to 1968. Listed in Who's Who in Amenca and American Men of Science, Dr. Hogan holds honorary degrees from Harvard, Lehigh, Montana State and Worcester Polytechnic Institute.

Les Hogan and his wife, Audrey, reside in Atherton, California. They have one daughter, Cheryl, who is married, and two grandsons. Dr. Hogan is a "man about the house" repairing everything that needs fixing. He is a great fisherman and enjoys gardening and hiking in the woods.

Retrieved from "https://ethw.org/w/index.php?title=C._Lester_Hogan&oldid=171838"
Categories:
This page was last edited on 17 December 2018, at 20:00.
About ETHW
Policies and disclaimers