I've been looking at a bicycle in a shop since January, but the $1,000. price seems too high. The shop owner says that at the end of the year, if it's still in inventory he'll drop the price 50 percent to $500 (can I wait that long?). Moreover, he said if it still doesn't sell, he'll drop the price another 50 percent next year.

From there my thinking was suddenly extrapolating to longer price-decreasing trends. For instance, if the bike shop owner continues to drop the price 50 percent for 10 years in a row, the price would be 1/1000th of the original price, or just $1. (It's hard to imagine, buying a $1,000 bike for just a dollar. At that price I'd probably take three of them—two for my home and one for work.) My mental extrapolation continued. If the price kept dropping in the same way for another ten years, a bike would cost 1/10th of a cent (a mill, the smallest accounting unit in the U.S.A.). As we live in a mostly linear world—dollars per hour, cents per pound, miles per gallon—the concept of an exponential price change (.510 = 1/1024) is startling. Ten bikes for a penny is certainly at the limits of my imagination.

Yet Gordon Moore suggested precisely such an exponential price change in 1965 when he postulated that semiconductor integrated circuit (IC) prices would fall 50 percent a year for the coming years, a prophecy that was fulfilled for approximately 20 years. Around 1985, prices continued to drop but the rate slowed, to approximately 50 percent every 14–18 months (rather than in 12 months).

When I started working with IC chips in 1965 there were approximately 30 transistors on a chip. Today there are three billion, and the chip price is roughly the same. Some people think about this effect, known popularly as “Moore’s Law,” in terms of an exponential increase in transistors on a chip. The other way to think about it is as an exponential decrease in the price of transistors. Transistors on today’s chips (and thus what a chips do for the user) are about a billion times “cheaper” than they were for an IC chip that Moore described in 1965. Of course, Moore’s Law is not actually a law but a statistical experience in the improvements in semiconductor chip technology.

The driver for this phenomenon is price elasticity, namely, people consume more when prices go down (more memory in a computer, or more logic such as graphics, floating point, longer word lengths, etc.), and people buy more cell phones, cars, and personal computers. Consider this: if the number of transistors sold only doubled every year while the price of transistors is halving, a semiconductor company would not be advancing in its business. The company needs its customers to more than double their consumption of the chips doubly packed with transistors. Customers do so because of price elasticity while enabling semiconductor companies continued success. Hence the companies continue to make the large investment in new semiconductor technology that allows them to continue “Moore’s promise.”

The semiconductor technology objective is to make things smaller. Because it is mainly a photographic process, you just need a “better enlarger” (actually a reduction lens system). Optics was the primary enabler of the Moore's law for more than 30 years, before it apparently was going to “hit a wall.” The photolithography process uses a laser light source with a 180nm wavelength, and it isn't easy to get one smaller. It seemed impossible to get chip objects smaller than 180nm and hence Moore's law would end. A simple analogy is that you cannot paint the Mona Lisa with a common paint roller.

However, we now read technical news about chips having transistors sizes of 65nm, 25nm and even smaller while still using the 180nm light. For an old timer in the field like I am, such small transistor sizes seemed impossible. However, using additional optical tricks (almost like smoke and mirrors), the basic optical photographic barrier was broken. I can't see how we can get any further shrinking. But I’ve thought that before. 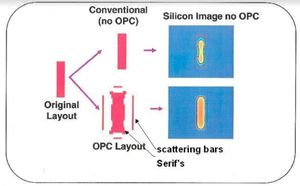 To get objects printed correctly on a chip below the patterning light source you need a trick, and one of the tricks is to use Optical Pattern Correction (OPC) features. Semiconductors are made using photographic masks and you do not get on the chip what you have on your mask (What You See Is not What You Get).

In the above illustration, the desired chip image is just a vertical rectangle (Original Layout). However, if you provide that on the mask (no OPC) you get a fuzzy oval, lacking the squared corners of the original. On the other hand, you can add OPC (OPC Layout) to the mask such as scattering bars and serifs. This results in chip features looking much more like the original layout even though it is not close to what is on the mask itself.

Retrieved from "https://ethw.org/w/index.php?title=First-Hand:Musing_about_Gordon_Moore%27s_Prophecy&oldid=180705"
Category:
This page was last edited on 5 August 2020, at 22:39.
About ETHW
Policies and disclaimers