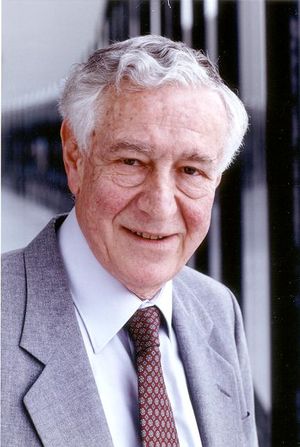 At the age of 25, Landauer began a career in semiconductors at IBM. As part of the two-man team responsible for managing IBM's Research Division in the mid-1960s, he played a key role in the creation of a number of programs, including the company's work on semiconductor lasers. In 1969, Landauer was appointed an IBM Fellow.

Much of his research since then relates to the kinetics of small structures. He showed that in systems with two or more competing states of local stability, their likelihood depends on noise all along the path connecting them. In electron transport theory, he is particularly associated with the idea, taken from circuit theory, that electric flow can be considered a consequence of current sources as well as applied fields. He has also pioneered in the area of information handling. His principles have been applied to computers and to the measurement process, and is the basis for Landauer's own demonstration that communication, in principle, can be done without minimal unavoidable energy use.

A Life Fellow of the IEEE, Dr. Landauer is a member of the National Academy of Engineering, the National Academy of Sciences, the European Academy of Science and the Arts and a Fellow of The American Academy of Arts and Sciences. He has an honorary doctorate from the Technion in Israel and was the 1991 Scott Lecturer at the Cavendish Laboratory at Cambridge University. He was awarded the 1992 Stuart Ballantine Medal of the Franklin Institute, the Centennial Medal by Harvard in 1993, the Oliver E. Buckley Prize by the American Physical Society in 1995, the Moet Hennessey Louis Vuitton (LVMH) Science for Art Prize in 1997, and the IEEE Edison Medal in 1998 'For pioneering contributions to the physics of computing and conduction.'

The range of his work has been recognized in special issues of two journals, 10 years apart. They are the IBM Journal of Research and Development (January 1988) and the Superlattices and Microstructures (March/April 1998). (Editor's Note: Dr. Landauer passed away on 27 April 1999 at his home in Briarcliff Manor, NY, USA. He was 72.)

Retrieved from "https://ethw.org/w/index.php?title=Rolf_Landauer&oldid=147052"
Categories:
This page was last edited on 25 February 2016, at 18:14.
About ETHW
Policies and disclaimers