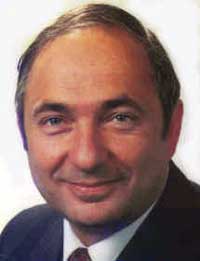 Stanley Mazor was born on 22 October 1941 in Chicago, Illinois. As a youth, his family moved to California, where he attended Oakland High School from which he graduated in 1959. He enrolled in San Francisco State University (SFSU), majoring in math and studying helicopter design and construction as a hobby. Mazor met his future wife Maurine at SFSU and they wed in 1962. Around the same time, he became interested in computers and learned to program SFSU’s IBM1620 computer, taking a position as a professor’s assistant and teaching other students to use the technology. Meanwhile, he continued to study computer architecture in technical manuals outside of school.

In 1964, he became a programmer with Fairchild Semiconductor, followed by a position as computer designer in the Digital Research Department, where he co-patented “Symbol,” a high-level language computer. In 1969, he joined the year-old Intel Corporation, and was soon assigned to work with Federico Faggin and Ted Hoff on a project to design and construct a microprocessor—often dubbed a “computer-on-a-chip”—based on a concept developed earlier by Hoff. Credited along with Faggin and Hoff as co-inventor, Mazor himself wrote the software for the revolutionary new chip, dubbed the Intel 4004. After working as a computer designer for six years, Mazor moved to Brussels, Belgium where he continued to work for Intel, now as an application engineer helping customers to use the company’s products. He returned to California the following year, and began teaching, first in Intel’s Technical Training group, and later at Stanford University and the University of Santa Clara. Various teaching engagements took him around the world, including Stellenbosch, South Africa; Stockholm, Sweden; and Nanjing, China. In 1984, Mazor joined Silicon Compiler Systems, and in 1993, then working at Synopsys, he published a book on chip design language entitled A Guide to VHDL. Over the course of his career, Mazor has also published fifty articles.

Currently, Mazor is the Training Director of BEA Systems. Along with his co-inventors Hoff and Faggin, he has received numerous awards and recognitions, including the Ron Brown American Innovator Award, the Kyoto Prize, and induction into the National Inventors Hall of Fame.

Retrieved from "https://ethw.org/w/index.php?title=Stanley_Mazor&oldid=181625"
Categories:
This page was last edited on 28 September 2020, at 13:51.
About ETHW
Policies and disclaimers