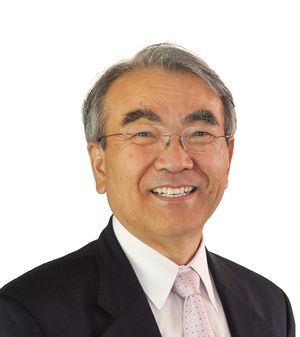 Shaping the field of computer vision since its infancy, Takeo Kanade, beginning with his Ph.D. thesis in 1973 on computer face recognition, has demonstrated the real-world value of robotics to industries ranging from automotive to medical with concepts often ahead of their time. It was Kanade’s pioneering work since the mid 1980’s that paved the way for today’s driverless cars with one of the first demonstrations of robotics technology for a driverless vehicle. He incorporated computer vision systems and other sensors to detect lane lines and other cars and to control both steering and speed automatically. This culminated in 1995 with the NavLab autonomous land vehicle, which drove 3,000 miles across the United States under autonomous control. Kanade’s impact on medicine can be seen in his early image overlay system that gave surgeons x-ray-like vision in visualizing anatomic structures inside a patient. It was one of the first systems to demonstrate what is now commonly referred to as medical augmented reality, and this work was closely related to his development of the HipNav surgical navigation system for orthopedics research. In what he calls virtualized reality, Kanade developed the EyeVision camera system, in which a camera operated by one person drives 30 additional remote cameras to enable three-dimensional freeze-frame views of an activity. The successful debut of EyeVision at Super Bowl XXXV in 2001 brought enormous attention to computer vision and spurred research in the field. To address his lifelong passion for developing robotics to assist people in their everyday activities, Kanade led the creation of Quality of Life Technology Center at Carnegie Mellon University to help develop intelligent systems to transform the lives of people with disabilities or reduced capabilities due to aging.

An IEEE Fellow and member of the U.S. National Academy of Engineering, Kanade is the U.A. and Helen Whitaker University Professor of Computer Science and Robotics at Carnegie Mellon University, Pittsburgh, PA, USA.

Retrieved from "https://ethw.org/w/index.php?title=Takeo_Kanade&oldid=158956"
Categories:
This page was last edited on 23 April 2018, at 16:35.
About ETHW
Policies and disclaimers