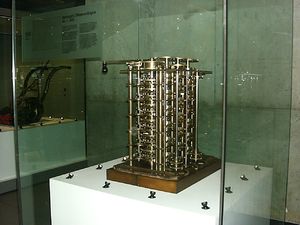 A difference engine—a machine capable of computing polynomial equations and printing out mathematical tables—was described as early as 1786, in a book published by Hessian engineer J.H. Müller. But not until mathematician Charles Babbage convinced the British government to support the concept in 1823 did such a project seem possible.

Born to affluence and classically-educated, Babbage rose to the top of the scientific academy in Britain in the early nineteenth century and was widely respected for his mathematical talent. On June 14, 1822, he presented a paper before the Royal Astronomical Society addressing a core problem in their research. His “Note on the application of machinery to the computation of astronomical and mathematical tables” claimed that the time-consuming, error-prone, and expensive task of building these charts could be handled better by a hand-cranked calculating machine. Eager to find a more efficient calculator, the British government funded Babbage’s research for almost two decades, spending an estimated £17,000.

The difference engine was a series of columns number from 1 to N. It store one decimal number in each column. It was programmed by setting an initial value to each column. As the main shaft rotated, it performed a full set of addition and carry operations.

Babbage’s first generation design for the difference engine never functioned, but a more efficient second model, designed between 1847 and 1849, was recreated by scientists at the end of the twentieth century. Babbage's ideas and plans have since been recognized as the forerunner of the modern computer.

Retrieved from "https://ethw.org/w/index.php?title=Difference_Engine&oldid=157322"
Categories:
This page was last edited on 23 November 2017, at 06:41.
About ETHW
Policies and disclaimers