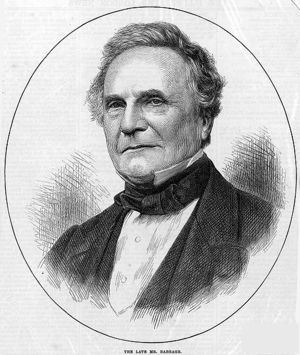 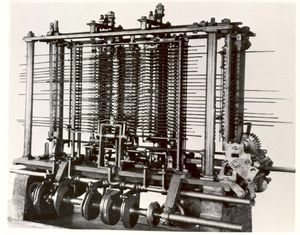 Charles Babbage (1791-1871) was an English mathematician best remembered for designing a series of mechanical computers known as the difference engine and the analytical engine, the latter using punched cards. Although his dream of creating a calculating machine could not be realized using steam-age technology, the difference engine and analytical engine were some of the earliest designs for mechanical computers.

Babbage was born to affluent parents and was educated at Cambridge University. Recognized at a young age for his scientific talent, he was elected to the prestigious Lucasian Chair of Mathematics at Cambridge in 1823.

While he held this influential position for twelve years, he infrequently lectured at Cambridge. Instead, he devoted much of his time to studying logarithms and building a device that would use machine-power to accurately calculate and print out functions. With the aid of a government subsidy, he hoped to build a calculator that could handle twenty-decimal numbers and sixth-order differences. In the 1840s, he corresponded with Ada Lovelace, who assisted Babbage in developing the difference engine by sharing several basic concepts of computer science with him. She also drafted instructions for using the engine to calculate so-called Bernoulli numbers. He died without finishing this device, and the incomplete "Difference Engine Number One" has been housed in museums ever since.

Contributing to the failure of the difference engine was Babbage's devotion to a grander project: an analytical engine that would use punched cards to code data in an automated computing system. Babbage developed this idea for a computing "mill" from observing the use of punch cards in loom weaving machinery. He conceived of this machine, which could add, subtract, multiply, and divide, on a massive scale, hoping to incorporate one thousand columns of geared wheels in a mill that had a memory unit and employed logical decision-making. Although his designs predicted modern computing technology, the mill was never built in Babbage's lifetime. His son later used Babbage's plans to build a small model of the analytical machine, which is now on display at the Science Museum in London.

Retrieved from "https://ethw.org/w/index.php?title=Charles_Babbage&oldid=155098"
Categories:
This page was last edited on 18 May 2017, at 16:06.
About ETHW
Policies and disclaimers