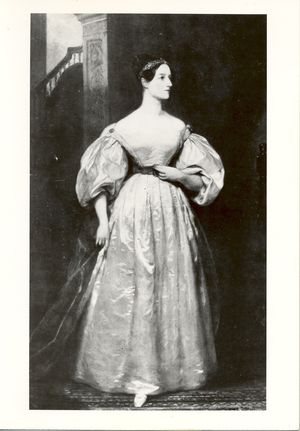 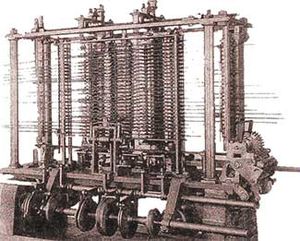 Babbage's analytical engine, the machine that was described in the paper that Lovelace translated.

Ada Lovelace was one of the first women to become involved in the technology of computers. Born Augusta Ada Byron on 10 December 1815 in London, Ada was the daughter of Lord Byron, the famous poet. The tempestuous Lord Byron married Annabella Millbanke in 1815, but their marriage was very unhappy, and the two separated just one month after their child, Augusta Ada, was born.

Her mother, fearful that young Ada had inherited her father’s tempestuous character, had her tutored in mathematics and music in an attempt to counter any tendencies toward becoming a poet. In fact, Ada inherited both her father’s intelligence and his psychological imbalance. Ada excelled in mathematics, but her education was sometimes interrupted by a mysterious chronic illness, which may have been psychosomatic. For instance, a severe “attack” at age 14 left her unable to walk for almost three years.

Things changed for Ada when, at age 18, she heard a lecture by Charles Babbage, an English mathematician who had recently developed the idea for a mechanical calculator that he called the Difference Engine. The next year, she was married to William King, the future Lord Lovelace. Two years later, now using her husband’s new title, she began to correspond with Babbage as Countess Ada Lovelace. Then in 1844, she volunteered to translate for Babbage an article written in Italian about the Difference Engine. Babbage, impressed with her work, encouraged her to append her own comments to the translation, which she did. In this way, Lovelace publicly contributed to the ongoing development of computing technology. Her notes included instructions for using the Difference Engine to calculate so-called Bernoulli numbers, a feat that has earned her the title of the first computer programmer.

Meanwhile, Ada’s life was not always happy. As her mother feared, Ada was afflicted by the same psychological problems that had made her father so difficult. She suffered a mental breakdown followed by chronic problems with breathing and eating. She saw a doctor about these problems, but his regimen of medicines, which included addictive drugs such as heroin and morphine, caused her to suffer delusions. She beat these addictions, and the delusions ended, but she then became obsessed with betting on horse races, and in the 1840s accumulated a considerable gambling debt. At the height of all this, she was struck by cancer and died at the early age of 36 on 27 November 1852.

Retrieved from "https://ethw.org/w/index.php?title=Ada_Lovelace&oldid=166622"
Category:
This page was last edited on 9 October 2018, at 12:58.
About ETHW
Policies and disclaimers