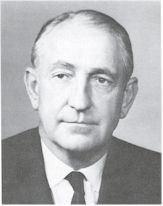 David Packard was a native of Colorado, having been born in Pueblo on 7 September 1912. He attended public schools there, and then entered Stanford University in 1930. He had a distinguished academic career at Stanford, attaining membership in Phi Beta Kappa, and also earned letters in football and basketball.

After receiving his A.B. degree in Electrical Engineering in 1934, he briefly pursued graduate study at the University of Colorado and then went to work for General Electric in Schenectady, New York. In 1938 he received an assistantship at Stanford and a year later received the degree of Engineer. In returning to Palo Alto he rejoined his old friend and classmate, William R. Hewlett, and the two fulfilled. a long-standing ambition - to go into business for themselves.

When they formed the Hewlett-Packard Company in 1939, their first employee was a young woman whom David Packard had married the previous year. She was the former Lucile Salter, a Stanford graduate who served as a very capable office manager for the busy entrepreneurs.

Even in the early days of the company it was apparent that Mr. Packard was a gifted administrator as well as a highly competent engineer. Under his war-time management, Hewlett-Packard was awarded the government's "E" for Efficiency honors on four different occasions, an outstanding production record. In 1947, when the firm was incorporated, he was elected president and served as chief executive officer until January, 1969, when he received a Presidential appointment as U.S. Deputy Secretary of Defense. In this capacity he made notable contributions to the nation's security and to the attainment of greater efficiency and economy in the defense establishment.

Upon his return to Hewlett-Packard as board chairman in January, 1972, Mr. Packard resumed an extremely active career highlighted by service to various business, professional and charitable organizations. He was chairman of The Business Council, and a director of Standard Oil Company of California, Caterpillar Tractor Co., Trans World Airlines and the California State Chamber of Commerce. He was a Fellow of the Institute of Electrical and Electronics Engineers, a member of the National Academy of Engineering, and an honorary lifetime member of the Instrument Society of America.

Mr. Packard's broad interest in education manifested itself in many constructive ways. Early in his career he served as president of the Palo Alto School Board and then later became president of the Board of Trustees of Stanford. He also served as a trustee of Colorado College and received an honorary degree from that institution in 1964. Similar degrees have been conferred upon him by Catholic University and the University of California.

In recognition of his outstanding public service, Mr. Packard received many national awards. These include the Herbert Hoover Medal, the highest honor awarded by the Stanford Alumni Association; the James Forrestal Memorial Award, presented by the National Security Industrial Association; the Silver Quill Award, from the American Business Press, Inc.; and the Award for Very Distinguished Public Service, presented by the Federal City Club of Washington, D. C.

Mr. Packard, like his partner, Mr. Hewlett, held several patents in the fields of electronics and scientific measurement. He also shared with Mr. Hewlett a keen interest in outdoor hobbies and activities. He was an avid hunter and fisherman, and spent much of his free time on their jointly-owned ranch properties.

Mr. Packard was co-recipient, along with Mr. Hewlett of the 1973 IEEE Founders Medal "For leadership in the development of electronic instruments, for creative management of an industrial activity, and for their unselfish public service."

Retrieved from "https://ethw.org/w/index.php?title=David_Packard&oldid=154774"
Categories:
This page was last edited on 12 April 2017, at 13:52.
About ETHW
Policies and disclaimers