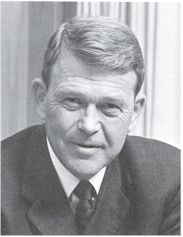 The last name of William R. Hewlett is best known as the first half of Hewlett-Packard, the innovative company that set a model for the entire Silicon Valley. The order of names in the original partnership was determined by a coin toss, and the outcome might be seen as ironic: Hewlett, a quiet, self-effacing man, rarely put himself forward. David Packard, the other half of the partnership, was much more outgoing. In their complementary relationship, Packard concentrated on the nuts and bolts of production, while Hewlett was more proficient in technical innovation, starting with the company’s first product, an audio oscillator. Hewlett’s contribution, ultimately as president and CEO in the 1970s, was key.

William R. Hewlett was born in Ann Arbor, Michigan. At that time his father, Dr. A. W. Hewlett, was a professor of medicine at the University of Michigan. Three years later he accepted a similar post at Stanford University, and moved the family to California, where his family had deep roots. William benefited from his father’s academic position, which exposed him to the lively cultural, literary and scientific life of San Francisco. He would eventually attend his father’s alma mater, Lowell High School. Tragically, this was after his father’s sudden and premature death when William was twelve.

William was not, however, a uniformally strong student. Suffering from what later would be more readily recognized as dyslexia, he had problems reading or taking notes. He made a strength out of this weakness, learning to memorize lectures by logically ordering them in his mind. He also concentrated on his stronger subjects, math and science, where he was exceptional. In addition to conducting chemistry experiments (occasionally involving explosives), he built a Tesla coil, made an electric arc from carbon rods, and built crystal radio sets for himself and his sister. He only earned a recommendation to Stanford from Lowell’s principal, however, when the principal realized that he was the son of one of his best former pupils, Albion Walter.

Stanford was a providential choice. There he attended the radio-engineering classes taught by Fred Terman, who also inspired David Packard to enter the field of electrical engineering. After graduation in 1934, while Packard left California to work for GE in Schenectady, Hewlett pursued a master’s degree at the Massachusetts Institute of Technology, rewarded in 1936, and further graduate work at Stanford, from which he received the degree of Engineer in 1939. During his grad school days, Hewlett developed the imaginative design for a resistance-capacity audio oscillator that would become Hewlett-Packard’s first product.

When William Hewlett and David Packard "formalized" their partnership with the famous coinflip in 1939, Fred Terman encouraged them to commercially produce Hewlett's resistance-capacity audio oscillator. They did, designating it “Model 200A” to give the impression that it was the latest (rather than the very first) offering of an established company. Disney Company purchased eight modified versions (now "200B") for its production of Fantasia, a sale that helped to propel the firm forward. At the time, the bachelor Hewlett was living in a room in back of the married Packard’s house on Addison Avenue, in Palo Alto; the garage, now an officially designated National Historic Landmark, served as their workshop. Their initial capital was $538, though by the end of 1939 they had made sales of over $5,000, with profits of over $1,500. As would become their standard practice, they plowed the profits back into the business.

That same year marked the beginning of another longstanding partnership for Hewlett. He married Flora Lamson, a University of California graduate, with whom he would have three sons and two daughters. In 1966, they would also together found the William and Flora Hewlett Foundation, now one of the nation’s largest, to embody one of his favorite phrases, “Never stifle a generous impulse. Flora died in 1977.

World War II was a period of growth for Hewlett-Packard as it fulfilled government contracts for electronic equipment. Hewlett, a reservist called for active duty in the Army, spent the time away from California. He was on the staff of the Army's Chief Signal Officer and then headed up the electronics section of the New Development Division of the War Department Special Staff. During this latter tour of duty he was on a special U.S. team which inspected Japanese industry immediately after the war. In 1947, shortly after he returned to Palo Alto, Hewlett-Packard was incorporated and Mr. Hewlett was named vice president. He was elected executive vice president in 1957, president in 1964 and became chief executive officer in 1969. Hewlett was involved actively in management of the company until 1987.

In managing the company, he helped create with David Packard what would become known as the “HP Way,” a unique business culture that emphasized rewarding employee initiative. They instituted profit sharing, employee stock ownership, flexible work hours, and other benefits widely copied throughout corporate America. Hewlett-Packard also kept on the cutting edge of innovation, growing from its focus on electronic measurement devices to a leading manufacturer of consumer electronics, printers and scanners in particluar.

Over the years Mr. Hewlett contributed greatly to the advancement of various organizations within the electronics industry. From 1950 to 1957 he was on the Board of Directors of the Institute of Radio Engineers (now the IEEE), and served as president of the Institute in 1954. He was the second individual from west of the Mississippi to head the Institute, the first being his Stanford engineering professor, Dr. Frederick E. Terman. He also played an important role in the development of the Western Electronics Manufacturers Association.

Indicative of his keen interest in education and medicine—he was the son of a doctor—he was a trustee of Stanford University, a director of the Kaiser Foundation Hospital and Health Plan Board, and a director of the Drug Abuse Council in Washington, D.C. He also served as a trustee of Mills College and as board president of the Palo Alto-Stanford Hospital Center. In addition, he held an honorary Doctor of Laws degree from the University of California in Berkeley.

Hewlett’s philanthropic interests extended around the world: to population issues and the status of women, their education, and economic opportunities in Africa, Southeast Asia, and Latin America; to conflict resolution, particularly in eastern and southern Europe, the former republics of the Soviet Union, and the Middle East; to U.S.-Latin American relationships; to the needs of the nation's liberal arts colleges and research universities; to the environment in the western United States; and to the improvement of K-12 education, the performing arts, and the many communities and neighborhoods of the San Francisco Bay Area. He also had a vital interest in his adopted California, and in 1994 founded the Public Policy Institute of California, to be guided by the longtime president of his foundation, Roger Heyns, chancellor emeritus of the Berkeley campus of the University of California.

Hewlett had a wide range of outside interests and hobbies, most of them based on his love for the out-of-doors. Like many Californians, he and his family were avid skiers. He was a part-time botanist and an accomplished mountain climber and fisherman. He also engaged in various ranching and cattle-raising operations with his long-time friend and associate, David Packard.

Hewlett was co-recipient, along with Packard of the 1973 IEEE Founders Medal “For leadership in the development of electronic instruments, for creative management of an industrial activity, and for their unselfish public service.”

David Packard, The HP Way: How Bill Hewlett and I Built Our Company (New York: HarperCollins, 1995).

Also: The official biographies on the Web sites for HP (http://www.hp.com/hpinfo/execteam/bios/hewlett.html) and the Hewlett Foundation (http://www.hewlett.org/AboutUs/wmHewlettBio.htm)