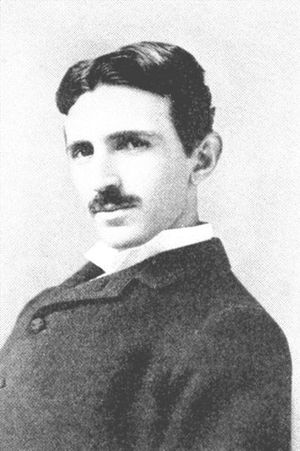 Nikola Tesla was born in 1856 in what is now Croatia to Serbian parents Milutin and Djuka Tesla. His father was a priest, an intellectual who prodded his son to develop unusual mental discipline. His mother was an inventor of many time-saving devices used for domestic tasks. Despite his early success at school and obvious interest in experimenting with mechanical devices, Tesla’s father was determined that young Nikola become a minister. Only after Tesla sank into an acute physical decline did his father relent and allow him to continue his scientific education at Graz Polytechnic Institute in Austria.

While still a student, Tesla began to think about the possibilities of alternating current (AC) electricity. AC electricity could generate high voltages for long distances without growing weaker. Tesla became convinced that AC was far more effective and less costly than direct current (DC) electricity, which was more common at the time.

After three years at the Graz Polytechnic Institute, Tesla stopped attending lectures. He left Graz in 1878 and began working as a draughtsman in Maribor. In 1880, Tesla moved to Prague to continue his studies at the Karl-Ferdinand University. Leaving Prague in 1881, Tesla moved to Budapest where Ferenc Puskás hired him to help install an Edison telephone exchange there. The Continental Edison Company sent Tesla to work in Paris and Strasbourg, where his work caught the eye of Charles Batchelor, head of Edison's operations in France, who invited Tesla to work for Edison in the United States. In 1884, he went to New York and immediately took a job with Edison, who recognized Tesla’s abilities but did not want to support his work on arc lighting. In 1886 Tesla founded the Tesla Electric Company, which funded his arc light experiments. More importantly, Tesla returned to his AC experiments and within two years had applied for more than thirty patents on his system.

After agreeing to a contract that turned over AC development and patents to the Westinghouse Corporation, Tesla became a wealthy man. When Westinghouse got into financial difficulties later, Tesla supposedly tore up his contract and refused further royalties for his patents. This decision affected his future work because he had fewer financial resources for laboratory space and equipment. He worked on a number of other inventions, including a transformer that changed low voltage to high voltage with a safe electrical current. This transformer is known as the Tesla coil.

Westinghouse supplied all the lighting for the Chicago World’s Fair in 1893 using the Tesla system, including the engine, dynamo, and AC generator. Thereafter, AC became the preferred method of generating electricity.

As a result of this and other successes, Tesla became a famous man. He enjoyed high society in New York, lectured internationally, and gave demonstrations of electricity that seemed like displays of magic to the public. His interests ranged beyond pure research on electricity. At an address to the National Electric Light Association, he proposed the principles of wireless broadcasting. Tesla also experimented with vibration, the rapid motion of an object that creates air waves, and with resonance, the effect of air waves on an object. As he grew older he began to rely more on empirical experiments instead of his original method of visual invention, which involved perfecting devices in his head and not building models until he was sure they would actually work. This shift in methodology made an 1895 fire in his research laboratory a major disaster, as he lost his books and notes as well as his equipment. However, he found financial backing for a new lab and began pioneering research on robotics, remote control, and solar energy. At sites in Colorado and Long Island, he tried to develop worldwide communications and power transmission systems, but problems with money and physics led to failure.

Along with Edison, Tesla was popularized by the press as an electrical wizard. Images of the inventor sitting calmly beneath dazzling displays of electricity became common sights. Tesla remained active and continued to work on new ideas. In 1916, the American Institute of Electrical Engineers (AIEE) recognized Tesla's contributions and awarded him the Edison Medal for "meritorious achievement in his early original work in polyphase and high-frequency electrical currents."

Financial difficulties continued to plague him, however, especially once his early patents expired. Increasingly reclusive and eccentric, Tesla lived alone in a room in the New Yorker Hotel until he died in 1943. The unit of magnetic flux density was named in his honor in 1960.

Retrieved from "https://ethw.org/w/index.php?title=Nikola_Tesla&oldid=155436"
Categories:
This page was last edited on 6 July 2017, at 02:19.
About ETHW
Policies and disclaimers