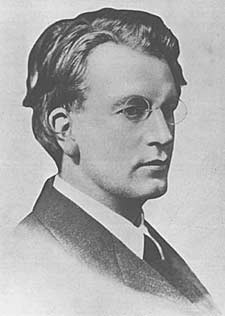 John Logie Baird was born in Helensburgh, Scotland to Reverend John Baird and Jessie Morrison Inglis in 1888. At age 14 he decided to electrify in his family home, mostly with equipment he made himself. Also as a teenager, he tried making a speaking cinematograph film. These experiments led to his interest in seeing over distance, and his future inventions with regard to television.

He enrolled in 1906 at the Royal Technical College to study electrical engineering, but the curriculum, his aptitude and interests led him toward optical and mechanical invention. Upon completion of his coursework, he worked for a time in industry, first in a truck factory and then improving engineering designs for engines and chassis. From 1911-13 he helped design electrical switchboards and switchgear. These professional placements entitled him to receive his degree from the Royal Technical College in 1914. 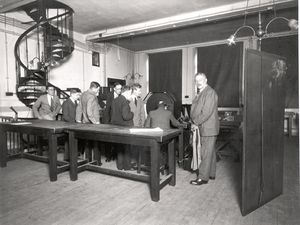 Baird demonstrating his system in 1929.

He was not a very healthy person. Often he had been sick, both as a child and a working adult. In 1914 the Army declared him unfit for service when he tried to enlist during World War I. He decided instead to go back to the University of Glasgow to obtain a BSc. degree, finishing the requirements but never sitting for exams.

Baird secured a position for the Clyde Valley (Scotland) Electrical Power Company in 1915 at the age of 27. But instead of focusing on his work there, he concentrated on his own inventing. Suffering from chronically cold feet, he invented the "undersock." He then opened the Baird Undersock Company in 1917, but it became only a marginal commercial success. A string of mostly money-losing business ventures created between the end of World War I and the early 1920s followed. These included an a jam factory, Australian honey import business, manufacturing boot polish, selling fertilizer, and marketing a low-grade floor cleaner called Baird's Speedy Cleanser. 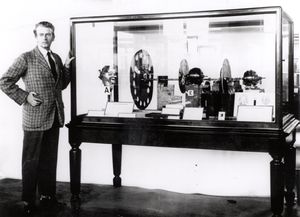 His interest in the idea of transmitting moving pictures became an obsession by 1923, when he turned to the project almost full time. Drawing on new developments in the field of electronics, he invented a system of mechanical television, the first such successful system that could actually broadcast images over space. Rather than being based on a cathode ray tube and vacuum tube camera, Baird relied on a Nipkow disc (a perforated, rotating disc) to disaggregate the televised image and reassemble it for view. An important new feature of the Baird system, given that radio broadcasting had recently appeared, was that it transmitted its signal by wireless, making mass distribution of televised images seem possible for the first time.

He made steady progress, transmitting the outline of objects by 1924, and recognizable faces by 1925. His 1926 demonstration of televised moving objects to the Royal Institution in London was the first such demonstration on record. That year, he also invented the “noctovisor”, which used infrared light to make objects visible in the dark or through fog. The main “Televisor” project continued to make headway. By 1927 he had successfully transmitted moving images over telephone wires between London and Glasgow and formed the Baird Television Development Company. The following year he transmitted the first transatlantic and first shore-to-ship moving images. The same year, he demonstrated color television and began developing the first video recording device. As his technology improved, resolution rose from 30 lines of definition to 240. That year, his Televisor went on sale to the public. 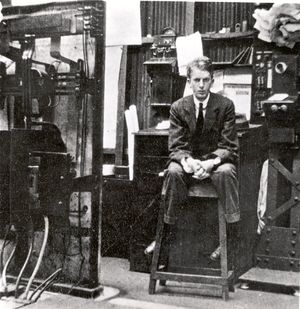 Initially viewing Baird as a competitor, the BBC was resistant to working with him. Starting in 1929, they collaborated on experimental broadcasts. But in 1935, the BBC set up a side-by-side competition between Baird’s system and Marconi’s all-electric system. By 1937 they had dropped Baird’s system altogether. Technological advances during World War II put Baird’s system further behind. Military research and development had led to improved CRTs (for radar) and electronic camera tubes (for experimental guided bombs), and now RCA was well in the lead in TV technology.

But Baird continued to innovate, expanding on his own ideas about all-electronic television, and adapting newer technologies to his thinking. During this period he worked on high-resolution color television, three-dimensional television and something resembling fiber optics, but he was unsuccessful in commercializing any of them.

The public image of Baird has remained that of a brilliant inventor and perpetual underdog. Like Edwin Armstrong in the United States and Nikola Tesla in the former Yugoslavia, Baird's sympathizers believe the inventor has been denied the respect he deserves.

Moseley, Sydney. John Baird: The Romance And Tragedy Of The Pioneer Of Television. London: Odhams, 1953.

From the Museum of Broadcast Communications

Jan Forman, one of the engineers at Baird Television by Malcolm Baird

Retrieved from "https://ethw.org/w/index.php?title=John_Logie_Baird&oldid=158621"
Categories:
This page was last edited on 28 February 2018, at 17:13.
About ETHW
Policies and disclaimers