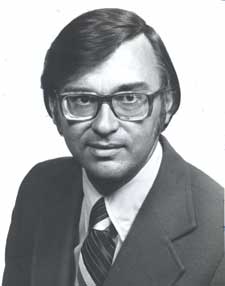 Dr. Marcian Edward “Ted” Hoff, Jr. was born in Rochester, New York on 28 October 1937. Hoff became interested in science at an early age, and credits his interest in electronics to a subscription to Popular Science he received from his uncle when he was 12. He attended Rensselaer Polytechnic Institute as an undergraduate, and during his summer breaks, worked for Rochester’s General Railway Company, where he developed his first two patents. After receiving his bachelor’s degree in electrical engineering in 1958, he received a National Science Foundation Fellowship to attend Stanford University, where he earned an MS and PhD in 1959 and 1962, respectively, both in electrical engineering. He stayed on to work at Stanford for another four years conducting research on neural networks and integrated circuits.

In 1968, Hoff got a phone call that would jumpstart both his career and the computer industry. Robert Noyce, who had co-founded Intel Corp., that same year, was calling to ask him to join the new company, which Hoff soon did as its twelfth employee.

In 1971 the Japanese manufacturer Busicom approached Intel requesting integrated circuits for its calculators. While the Japanese company proposed the use of twelve different chips, each to control a different process, Hoff envisioned a single chip that could do it all and began work on bringing his idea to fruition. Hoff proposed that if the architecture could be constructed simply, the memory, calculating, and processing functions of a computer could be combined into one circuit—an idea that led to the first microprocessor, a “computer-on-a-chip.” Federico Faggin led the design team on the newly commissioned project, and developed the use of silicon in constructing the chip. The team also consisted of Hoff and Stanley Mazor, a new Intel employee who wrote the software for the chip. Just an 1/8 inch wide and 1/6 inch long, the chip Hoff, Faggin, and Mazor unveiled had as much power as one of the first electronic computers, ENAIC, which used 18,000 vacuum tubes and was so large it filled an entire room.

Realizing the potential of the powerful new invention, Intel bought back the design and marketing rights to the chip from Busicom for $60,000 and dubbed it the Intel 4004, which it formally announced in November of 1971. Hoff, Faggin, and Mazor continued to perfect their microprocessor, and were involved in its second and third versions, the Intel 8008 and Intel 8080. In 1980, Hoff became the first Intel Fellow, the company’s highest technical position. He left Intel in the early 1980s to accept a position with Atari as Vice President for Technology.

Inducted into the National Inventors Hall of Fame in 1996 for his invention of the microprocessor concept and architecture, Hoff is currently the Vice President and Technical Officer of Teklicon, Inc. His numerous honors include the Stuart Ballantine Medal from the Franklin Institute.

Retrieved from "https://ethw.org/w/index.php?title=Ted_Hoff&oldid=147226"
Categories:
This page was last edited on 29 February 2016, at 18:11.
About ETHW
Policies and disclaimers