This article was initially written as part of the IEEE STARS program.

Starting in 1960, desktop calculators based on vacuum tubes were introduced to replace the mechanical and electromechanical calculators that had been widely used in business, engineering and science. Electronic calculators were more durable, faster, and silent. In the mid-1960s vacuum tubes were replaced by discrete transistors to provide more functionality and greater durability. By the mid-1970s, small battery-powered pocket calculators, implemented with integrated circuits, had replaced desktop calculators and were rapidly replacing the previously indispensable engineering slide rules.

Prior to 1960 there were three general types of calculating devices: mechanical adding machines, calculators (both mechanical and electromechanical), and slide rules. Adding machines were used by accountants, bankers and merchants to add and subtract (often with a paper tape record of the calculation). Successful brands of adding machines were Burroughs, Comptometer and Victor. Calculators were larger units (often about the size of a typewriter) that could add, subtract, multiply, and divide. Calculators were used by engineers and scientists as well as in the business world. Important calculator manufacturers were Friden, Marchant and Monroe. Slide rules were simple mechanical devices used by engineers to multiply, divide, and perform other calculations that are based on logarithms and trigonometric relations. Keuffel & Esser and Pickett were the most common brands.

One of the most significant advances of the 20th century was the replacement of mechanical and electromechanical devices with electronic devices. This technological transition occurred with calculators as well as in many other fields such as television, music players, etc. The earliest machines were mechanical devices. Later machines included an electric motor (hence the term electromechanical) that reduced the effort required to operate the machines. Especially during World War II, large groups of electromechanical calculators (operated by teams of people referred to as “computers”) were used for many purposes, including computing trajectory tables for ballistics and as part of the Manhattan project. In mechanical machines, the inertia of wheels, levers, and shafts severely limit the speed of computation. In contrast, the circuits in the electronic calculators operate at speeds that are limited only by the speed of light. Also mechanical machines are quite noisy, whereas electronic machines are silent. Another important issue is that mechanical devices are susceptible to wear that could cause intermittent errors. Such intermittent errors can be far more devastating than complete failures because the user might get wrong answers without being aware that an error has occurred. 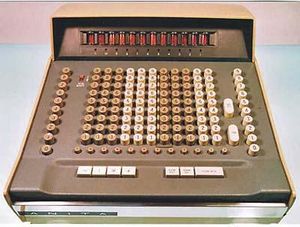 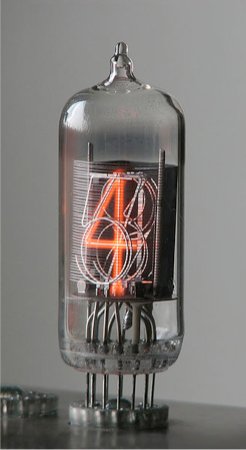 The first electronic desktop calculator was the ANITA (the name is an acronym for “A New Inspiration To Accounting”) (Figure 1), designed and produced by Sumlock Comptometer, Ltd. This British company had a line of mechanical calculators, but the ANITA Mk VII that was introduced in 1960 was a radical departure from their previous products. The ANITA used gas-filled thyratron tubes and selenium rectifiers for the logic circuits to perform the computations. The 12-digit display used a Nixie tube (with metal numbers in a neon filled vacuum tube) for each digit (Figure 2). Since the ANITA calculators had no moving parts, they were fast, silent, and needed minimal maintenance. The ANITAs were four-function calculators that could add, subtract, multiply, and divide. 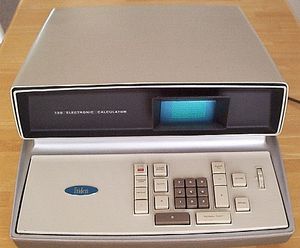 One of the first transistorized calculators was the Friden EC-130 (Figure 3) introduced in June 1963. It used discrete transistors and diodes for the logic. It used a small cathode-ray tube to display the 13-digit values of four registers. The registers showed the previous entries and result of the calculation. Since there were 4 registers of 13 digits, a sizable memory was required. The EC-130 used a steel-wire ultrasonic delay line for its memory. At one end, the wire was given a small twist for each bit to be stored. The twist propagated along the wire at the relatively slow speed of sound and was detected at the far end. Upon detection, the bit could be used or it could be reentered into the delay line. Like the ANITA, the Friden EC-130 was a four-function calculator. A few years later, Friden introduced the EC-132 that added a square root operation to the four basic functions of the EC-130. 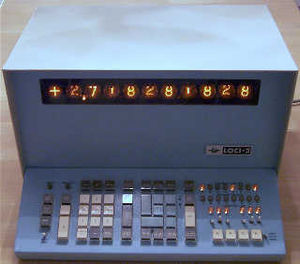 Another transistorized desktop calculator was the Wang LOCI (LOgarithmic Calculating Instrument) (Figure 4), introduced in 1965. By using the factor-combining method of calculating logarithms and anti-logarithms, this calculator provided functions useful for engineering, such as calculating roots and powers. The display unit was separate from the keyboard, and multiple keyboards could be ganged to a single LOCI display unit. Although it pioneered the concept of a programmable calculator, the LOCI was an engineering calculator that was too difficult to use for business and commercial applications. For example, the LOCI produced an answer of 3.999999999 for the multiplication of 2 x 2. While this was not a problem for engineers who were accustomed to slide rules with three digit accuracy, it was not acceptable for most non-technical users. In late 1966, Wang started selling the Model 300 calculator that was better suited for general use. Wang’s experience with the Model 300 led to a line of stand-alone word processors that were very successful in business applications. 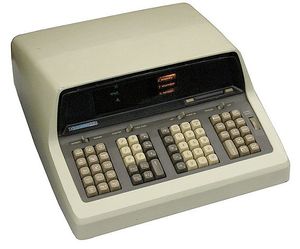 The Hewlett Packard 9100A (Figure 5), introduced in 1968, was the ultimate desktop engineering calculator. This calculator was based on a prototype designed by Tom Osborne, who had worked for the Marchant Company, which was one of the pioneers in mechanical and electro-mechanical calculators. The production model (as implemented by Hewlett Packard) used discrete transistors to perform the computations. Like the Friden electronic calculators, it used a small cathode-ray tube to display the contents of three registers. The registers showed the operands and result of each calculation. In addition to the basic four functions, the 9100A provided a full suite of engineering functions, including transcendental, logarithmic and trigonometric functions. To provide the engineering functions, a read-only memory of 32,000 bits was required for the constants needed for the CORDIC algorithms. The read-only memory was constructed with inductive coupling between lines on the two sides of a printed circuit board. Both the Wang LOCI and the HP-9100A used random-access memories (RAM for short) implemented with magnetic cores to hold data and the results of calculations. The RAM could also hold sequences of instructions allowing the machines to be programmed to perform repetitive computations. In fact they could be viewed as small computers with capability similar to the personal computers that were introduced a decade later. The HP- 9100 could store the programs on a magnetic card the size of a credit-card. 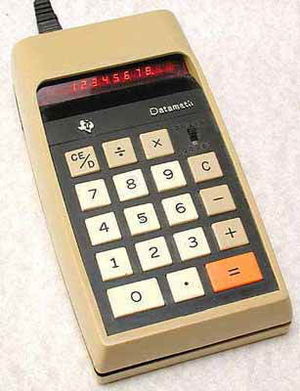 Starting in the mid-1960s, Texas Instruments began the development of the “Cal-Tech”, a prototype for a handheld four-function electronic calculator with a paper tape to display the results. The Canon Pocketronic battery-powered pocket calculator introduced in 1970 was based on the “Cal-Tech.” In 1972 Texas Instruments began making and selling battery-powered pocket calculators under its own name. The first unit sold under the Texas Instruments name was the TI-2500 Datamath calculator (Figure 6) that was introduced in June 1972. It used light emitting diode (LED) displays with distinctive red numbers that were attractive and easy to read, but consumed a lot of power. Ultimately they were displaced by liquid-crystal displays (LCD) that consume very little power. In the five years after introduction of the Datamath, TI introduced at least 70 different models with a wide range of capabilities. As pocket electronic calculator sales volume increased at an exponential rate, the prices fell: by 1976 the TI-30 scientific pocket calculator was selling for less than $24.95. At this time, desktop four-function calculators had become almost obsolete except for applications that required a record of the calculation. 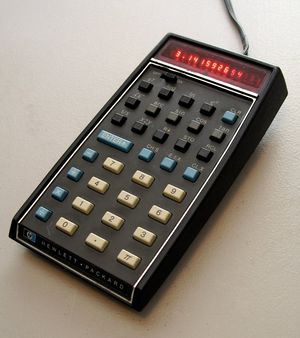 In 1972 Hewlett Packard introduced the HP-35 (Figure 7), a pocket calculator that performed most of the functions of the Hewlett Packard 9100A at about 1/10th of the price. This really caught the attention of engineers and scientists. Originally simply called “the Calculator,” when put in production it was named the HP-35 because it has 35 keys. It displayed only a single 10-digit number on its red LED display (either the most recent entry or the result of the calculation). The calculator maintained a stack of four internal data registers that minimized the need to enter operands. Unlike the desktop calculators that used magnetic cores for the data memory, the HP-35 used a small serial shift register implemented on a separate integrated circuit. The data register contents could be accessed by stack manipulation instructions. Since it was battery powered and small enough to fit into a pocket, the HP-35 was particularly useful for working engineers. A few years later Hewlett Packard introduced the HP-65, a programmable pocket calculator that used small magnetic strips to store the programs.

Although initially quite expensive (the HP-35 cost $395.00 when it was introduced in 1972) the prices of engineering pocket calculators dropped rapidly due to competition. As a result, pocket calculators initiated a dramatic change in the engineering community, as engineers discarded their beloved slide rules for the greater precision of electronic computation.

The first electronic calculator (the ANITA) only had memory for the result of the calculation. The Friden EC-130 with its ultrasonic delay-line memory had enough memory to store previous operands and the result. Both the Wang LOCI and the Hewlett Packard 9100 had large memories that could hold the operands as well as a sizeable sequence of operations. In a sense they were like primitive personal computers. The early pocket calculators had very limited memory: the Datamath (and most early pocket calculators) were similar to the ANITA, while the HP-35 had 4 registers (each of which held one operand or result) like the Friden EC-130 although the memory technology was quite different.

The author thanks members of the STARS Editorial Board and others for careful review and constructive criticism, with special thanks to Frederik Nebeker, Emerson Pugh, and James Cortada for helpful comments and suggestions.

Earl E. Swartzlander, Jr. holds a B.S.E.E. degree from Purdue University, an M.S.E.E. degree from the University of Colorado, and a Ph.D. in Electrical Engineering from the University of Southern California. In his current position as a Professor of Electrical and Computer Engineering at the University of Texas at Austin, he and his students conduct research in computer engineering with emphasis on application specific processor design, including high-speed computer arithmetic, processor architecture and emerging technologies. He was the Editor-in-Chief of the IEEE Transactions on Computers from 1990-1994 and was the founding Editor-in-Chief of the Journal of VLSI Signal Processing.

Retrieved from "https://ethw.org/w/index.php?title=Electronic_Calculators:_Desktop_to_Pocket&oldid=112926"
Category:
This page was last edited on 9 January 2015, at 17:16.
About ETHW
Policies and disclaimers