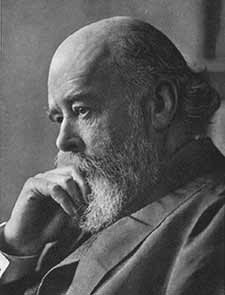 English physicist Sir Oliver Joseph Lodge contributed to many fields—radio, electron research, the ether (at one time believed to be a medium that filled all space), chemistry, and even spiritualism and the study of life after death.

Lodge’s eclectic and rich life began on 12 June 1851, in Penkhull, England. The eldest son of Oliver and Grace Lodge, young Oliver was educated at Newport Grammar School and then at University College, London, where he received his degree in 1872. In 1877 he obtained a doctorate at London University. That same year he married and began a family which eventually grew to 12 children (six sons, six daughters). During these years, Lodge held a series of university level teaching jobs and in 1881 was appointed professor of physics and mathematics at the University College, Liverpool. He remained there until 1900 and then moved on to Birmingham University.

Although active in many areas, Lodge made a particularly strong mark in the field of wireless telegraphy (radio). In 1894 he perfected the “coherer,” an electrical device used to detect radio waves. Lodge’s version of the coherer greatly improved the detection of radio waves and made reception clearer. It became an integral part of early radio.

In 1898 Lodge was granted a patent for “syntonic” tuning. In essence, he claimed that making the antenna coil or inductance variable made tuning of the antenna circuits in a system of wireless communication possible. This “syntonic” or tuning patent won him a high place in the history of wireless, for it established him as a pioneer in experiments that recognized the necessity of tuning in order to select a desired station. The Marconi Company acquired this patent in 1912.

Throughout his career Lodge was a prolific author and published many works. One of the most influential was the book Modern Views of Electricity, written in 1889. In it he compared the ether, of which he was one of the most persuasive believers, to an elastic jelly filling all space; he compared magnetism to whirlpools in that jelly, or to interlocking wheels. Although his theories were later proven incorrect, at the time Lodge's work included one of the most advanced theories of physics and electricity. It stimulated research that would later prove his theories wrong.

After 1910 Lodge became increasingly prominent as a spiritualist leader and a strong believer in the possibility of communicating with the dead. In 1916 he published Raymond or Life and Death: With Examples of the Evidence for Survival of Memory and Affection After Death. In it, Lodge wrote about post-mortem communication with his son Raymond, who had been killed in World War I. Later, he announced that he himself would try to communicate with the world after his death. He placed a sealed document in the custody of the English Society of Psychical Research, saying that his message from the beyond would correspond with what he had recorded in the document. Lodge died on 22 August 1940. One year later members of the English Society of Psychical Research convened to contact him via séance. Although the society claimed success it was never able to prove it as the document disappeared shortly afterwards. Lodge hasn’t been heard from since.

Retrieved from "https://ethw.org/w/index.php?title=Oliver_Lodge&oldid=146764"
Categories:
This page was last edited on 11 February 2016, at 15:58.
About ETHW
Policies and disclaimers