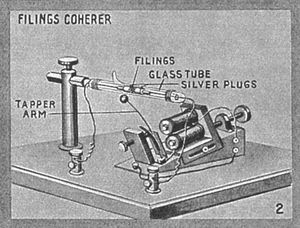 French physicist Edouard Branly discovered radioconduction, or the “Branly Effect,” at the Catholic University of Paris on November 24, 1890. Radioconduction, channeled through Branly’s “coherer,” transformed the development of wireless telegraphy. Within a little more than a decade, Guglielmo Marconi would send the first wireless communication across the Atlantic.

Branly had earned a doctorate in physics and a degree in medicine before taking up his studies of radio conductors in 1890. He drew on research performed in the mid-1880s by Temistocle Calzecchi-Onesti, which demonstrated if an electrical signal was applied to iron filings put in an insulated tube with two electrodes, the filings would conduct electricity. Branly also sought to apply Heinrich Hertz’s 1888 discovery of electromagnetic waves to conduct electrical signals. Hertz failed to build an effective detector or coherer for these waves. His receiver was a simple loop that could not transmit radio waves for a long distance.

Branly’s innovation was developing the first practical coherer capable of receiving radio waves. He observed that thin metallic films changed their level of resistance when exposed to electrical sparks. After experimenting with the response of platinum placed on glass to electricity, he built a coherer with a glass tube that contained metal filings. These filings connected two ends of a wire conductor that entered the tube.

Ordinarily, the metal filings offered great resistance to the passage of current: they served as an insulator. But when the tube was taken out of a battery circuit, the resistance dropped tremendously—from millions of ohms to just hundreds—and the filings became a conductor. This change was particularly evident when the electrical spark was generated between the terminals of an induction coil or through the discharge of a Leyden Jar. The loose zinc and silver filings would “cohere” and offer a path of increased conductivity that was used to detect transmissions. Yet, simply by tapping the filings, the strong resistance could be restored.

Oliver Joseph Lodge, a British physicist, refined Branly’s coherer for use in receiving wireless signals. Distant stations could send electrical waves as code to a coherer. The coherer’s resistance would decrease so that it could receive and reproduce the signal on its sounder. Lodge added a device to the coherer that shook the filings between receptions, automatically restoring the resistance of the filings. This technology became the standard for early wireless telegraphy.

In 1901, Guglielmo Marconi, who patented a system of radio telegraphy in 1896, sent the first transatlantic radio transmission. During this landmark in the history of wireless technology, Marconi was careful to credit Branly for his fundamental research. “Mr. Marconi sends to Mr. Branly his respectful compliments for the wireless telegraphy through the English Channel,” he stated in his message. “This beautiful result being due partly to remarkable work of Mr. Branly.”

Retrieved from "https://ethw.org/w/index.php?title=Coherer&oldid=157345"
Categories:
This page was last edited on 23 November 2017, at 06:45.
About ETHW
Policies and disclaimers