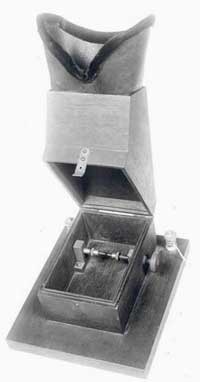 Thomas Edison almost invented radio. During November of 1875 Edison and his assistants were busy working to improve telegraphic devices. They were using a vibrating device to generate a small alternating electrical current of high frequency. They noticed that when the device vibrated, metal objects that touched it generated sparks. Although this phenomenon was known among telegraph operators, Edison decided that it must represent a new and as yet unknown force. After careful experimentation, Edison determined that the force was not caused by electromagnetic induction. The team decided to give this mysterious new force a name—the “etheric” (ee-theer-ic) force.

Edison’s team built a dark box called the etheroscope. This allowed them to see the sparks more easily. It also demonstrated how the etheric force could be used on ordinary telegraph lines to send messages. Edison also discovered that the etheric force could be transmitted a long distance along a wire and still be detected at the far end. He used an existing telegraph cable to send a message to a point near New Brunswick, New Jersey, about 25 miles away, which was then detected a few feet from the wire. Edison decided that with further development, the etheric force could be used to enhance telegraph services, and this would be its major significance. He thought it would allow telegraph companies to send messages on uninsulated conductors such as railroad tracks, therefore saving them money.

When it was reported in the papers, however, Edison was ridiculed. The etheric force was compared to claims that others had made about mysterious new forces, such as “psychic” forces that could allow telepathy. Elihu Thomson and Edwin Houston published the results of their own experiments and concluded that the etheric force was simply electromagnetic induction, and Edison soon dropped his experiments. Thompson and Houston, however, were wrong.

What Edison had actually discovered, though neither he nor his opponents understood it, was the basis of radio communication. The vibrator he used produced radio frequency electromagnetic waves, which caused the sparks in nearby metal objects. The waves would tend to follow a conductor, even a very long one such as the telegraph line from Newark to New Brunswick. If a detector of radio waves had been available, it might have picked up the Edison transmissions from a long distance. Unfortunately, it would be more than a decade before Edison’s contribution would be appreciated. In 1889, Heinrich Hertz completed his experiments proving the existence of radio waves.

Retrieved from "https://ethw.org/w/index.php?title=Etheric_Force&oldid=154702"
Categories:
This page was last edited on 12 April 2017, at 13:51.
About ETHW
Policies and disclaimers