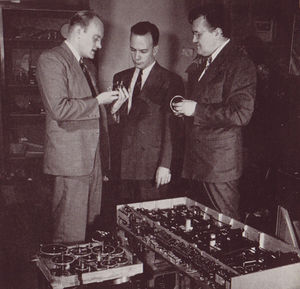 Antonin Svoboda and the Ballistics Computer

Svoboda was born 14 October 1907 in Prague, then part of the Austro-Hungarian Empire. He earned a degree in electrical engineering from the Czech Institute of Technology in 1931, and in 1936, he earned his doctorate with a thesis on the use of tensor calculus for analysis of electric power systems. The same year Svoboda began two years of service in the Czech army (Czechoslovakia had been formed in 1918 as one of the successor states of Austria-Hungary). He helped design an analog system to direct the fire of anti-aircraft guns. In 1938, he became an assistant professor at the Czech Institute of Technology, but with the arrival of the war, he moved first to Paris and then, at the beginning of 1941, to the United States.

The center of radar development in the United States during World War II was MIT's Radiation Laboratory. Svoboda began work there in 1943 and remained there until 1946. The development of radar in the late 1930s focused on long-range detection of aircraft, but it soon became clear that so fundamental a capability could be useful in many ways, including surveillance, navigation and fire control. Perhaps because of his earlier work in Czechoslovakia, Svoboda worked on fire-control systems at the Rad Lab. These systems, which used radar for target location, were sophisticated analog computers, taking into account various factors, such as wind and relative movements of gun and target, to calculate how the gun should be pointed so as to bring about an encounter of projectile and target. The Mark 56 anti-aircraft defense system was one to which Svoboda made a vital contribution.

An important legacy of the Rad Lab was a monumental series of 28 books that presented much of the electronics development that had taken place there. Svoboda was the author of volume 27, Computer Mechanisms and Linkages (1948), and this book became fundamental for the field of analog computers. Such computers, however, soon gave way to digital computers, and Svoboda soon turned his attention to digital computers.

In 1946, Svoboda returned to Czechoslovakia, intent on helping his homeland develop a computer industry. In 1950, he established a computer laboratory at the Central Institute of Mathematics in Prague. This laboratory grew and, as the center of computer-science research in Czechoslovakia, was renamed the Research Institute of Mathematical Machines. Two important computers built there, under the direction of Svoboda, were the SAPO and EPOS machines.

The Communist regime of Czechoslovakia made it increasingly difficult for Svoboda to continue work as he wished, so he returned to the United States. In 1966, he joined the faculty at UCLA, where he remained until his retirement in 1977. Svoboda died on 18 May 1980 in Oregon, where he had moved after retirement.