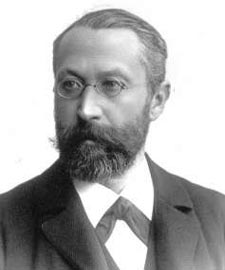 Karl Ferdinand Braun, German physicist and Nobel Prize winner was born on 6 June 1850 in the German town of Fulda. He was the sixth of seven children born to a family of modest means.

Braun was a naturally precocious child whose parents had high expectations of him. As a youngster he attended the local gymnasium, an academic high school that had very strict entrance requirements. Braun showed a talent for mathematics, as well as the natural sciences and composition. He excelled at academics and after gymnasium attended the University of Marburg where he studied experimental physics, chemistry, and mathematics. In 1872 he obtained a doctorate in physics from the University of Berlin. At the urging of his father and seeking a secure future, Braun entered the teaching profession. He was an assistant to a professor at Würzburg University until 1874 when he accepted a teaching position at a gymnasium in Leipzig. In 1876 he was appointed Extraordinary Professor of Theoretical Physics at the University of Marburg, and in 1880 he filled a physics professorship at Strasbourg University. A series of other academic appointments followed.

As an experimenter and physicist, Braun is most famous for his invention of the cathode ray oscilloscope (the forerunner of the television tube and radar tubes) and for his contributions to wireless telegraphy (that is, radio).

In 1897 electrons had been “discovered” and Braun, like many other scientists of the day was intrigued. Braun discovered that a stream of electrons emanating from a negatively charged electrode inside a vacuum tube—a cathode ray—could be focused to a point at the end of the tube. If the end of the tube were coated with a fluorescent material, it would glow wherever the stream of electrons hit it. Braun also used a magnet outside the tube, which interacted with the electrons in the beam to move it back and forth. By moving the magnet, he could trace patterns on the screen. At the time, few people recognized the potential of Braun’s cathode ray tube. However, it laid the groundwork for subsequent developments such as Vladimir Zworykin’s iconoscope, which is the picture tube in a television. CRTs are also used in oscilloscopes and radars.

In 1898 Braun turned his attention to wireless telegraphy (radio) and conducted experiments to improve the broadcasting range of a transmitter. (Note, at the time, broadcasting meant transmission of Morse Code, not broadcasting of voice and music as we think of it today.) The system in use at the time had been developed by Guglielmo Marconi and could transmit only about 15 km (about 9 miles). Braun developed a system that greatly increased broadcasting range. While this discovery propelled the evolution of radio as a technology, it also had commercial significance—users were no longer tied to the Marconi system, which meant Marconi no longer had a monopoly in radiotelegraphy. Also in 1898 Braun was one of the founders of Funkentelegrafi GmbH in Cologne. When it was announced that the two men would share the 1909 Nobel Prize in Physics for their work on radio, rumors abounded about bad blood between the two rivals. However, both men amicably and proudly accepted their award.

The outbreak of World War I in 1914 proved disruptive to the work and life of Braun. In 1915 he traveled to New York City to testify in a radio-related patent case that might have military implications. Once in New York Braun was stuck there, as he could not be assured safe passage back to Europe. Although unhappy at being away from his wife Amalie who remained in Germany, Braun made the best of his time. He settled in Brooklyn, New York and spent time in nearby parks. He also met American physicists and remained abreast of developments in the field of radio. Another major project was his work on the manuscript Physics for Women. Braun had always been vexed by the lack of scientific education provided for girls. Much of the information in it was of a practical nature, intended to make the housewife’s life easier. However, a large portion of the book also took everyday activities and discussed the science behind them. The first chapter, for example, was called “The constitution of matter—or how to clean a glass.” Unfortunately, the aging and ailing Braun was too ill to complete the book.

In 1917 the United States declared war on Germany. Braun hoped desperately to return home, but this proved impossible. In the summer of 1917 he was informed that his wife Amalie had died. Less than a year later, on 20 April 1918, Braun died in New York.

Retrieved from "https://ethw.org/w/index.php?title=Karl_Braun&oldid=146463"
Categories:
This page was last edited on 2 February 2016, at 19:28.
About ETHW
Policies and disclaimers