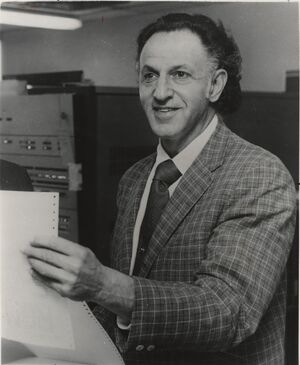 Bellman was born in Brooklyn on 26 August 1920. He received the B.A. degree from Brooklyn College in 1941 and the M.A. degree in mathematics from the University of Wisconsin in 1943. As part of his service in the U.S. Army, he spent two years at Los Alamos, in a Theoretical Physics Division group. Leaving Los Alamos in 1946, he entered Princeton and completed his work toward the Ph.D. degree in just three months.

In the immediate postwar years, Princeton was a center of defense-motivated research activity in non-linear differential equations. As a graduate student there, Bellman became a member of an inner circle of young mathematicians led by Professor Solomon Lefschetz. His doctoral research under Lefschetz resulted in his first major work "Stability Theory of Differential Equations" (1946), subsequently published as a book in 1953, and regarded as a classic in its field. He served on the faculty at Princeton until 1952.

Bellman joined the newly established Rand Corporation in Santa Monica, California in 1952. At Rand, he became interested in the theory of multistage decision processes, then emerging as an important problem-area in the control of both small- and large-scale systems.

His invention of dynamic programming in 1953 was a major breakthrough in the theory of multistage decision processes - a breakthrough which set the stage for the application of functional equation techniques in a wide spectrum of fields extending far beyond the problem-areas which provided the initial motivation for his ideas. This work marked the beginning of a new era in the analysis and optimization of large-scale systems and opened a way for the application of sophisticated computer-oriented techniques in a wide variety of problem-areas ranging from the design of guidance systems for space vehicles to pest control and network optimization.

In addition to his fundamental and far-ranging work on dynamic programming, Bellman made a number of important contributions to both pure and applied mathematics. Particularly important was his work on invariant imbedding, which by replacing two-point boundary problem with initial value problems makes the calculation of the solution more direct as well as much more efficient. His work on quasi-linearization and its applications to system identification led to many results of a practical nature in the study of nonlinear systems. In the later part of his career, Bellman's research focused increasingly on the application of mathematics to medicine and biological sciences. He was the founder of the journal "Mathematical Biosciences," and the co-author of the book "Mathematical Models in Medicine."

Bellman left the Rand Corporation in 1965 to join the faculty of the University of Southern California, where he held a joint appointment as Professor of Mathematics, Electrical Engineering and Medicine.

Over the course of his career, Bellman received a number of honors for his work, including: First Norbert Wiener Prize in Applied Mathematics, awarded in 1970 jointly by the American Mathematical Society and the Society for Industrial and Applied Mathematics; First Dickson Prize, Carnegie-Mellon University, 1970; and John von Neumann Theory Award, awarded in 1976 jointly by the Institute of Management Sciences and the Operations Research Society of America. He was elected to Fellowship in the American Academy of Arts and Sciences in 1975, and to Membership in the National Academy of Engineering in 1977. He was awarded the IEEE Medal of Honor in 1979, "For contributions to decision processes and control system theory, particularly the creation and application of dynamic programming."

Retrieved from "https://ethw.org/w/index.php?title=Richard_Bellman&oldid=156094"
Categories:
This page was last edited on 14 August 2017, at 15:00.
About ETHW
Policies and disclaimers