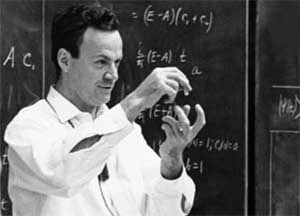 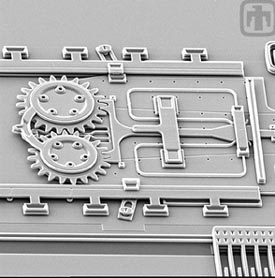 On 29 December 1959 physicist Richard Feynman delivered a public lecture entitled “There’s Plenty of Room at the Bottom.” While few took notice at the time, it is thought Feynman’s words inspired the new field of nanotechnology. The talk, delivered a the meeting of a local California chapter of the American Physical Society (our record of it actually comes from a version published later in a magazine), opened with Feynman announcing that he had identified what might someday be considered an entirely new field—but not a field of technology. Although he called it a field of physics—the study of matter, he went on to describe what might more accurately be called a field of science-based engineering.

In his lecture Feynman described something very curious: potentially writing an enormous amount of text, perhaps the entire content of the Encyclopedia Britannica, in a space about the size of the head of a pin. He described how this could be done using techniques available to engineers in 1959. He then went on to state that all the information in every book owned by a library could theoretically be converted to digital information and “stored” as “bits” consisting of particles of just a few atoms each, built in two different shapes to represent 0s and 1s. This would pack much more information into an even smaller space, and Feynman thought that the entire contents of the world’s great libraries could fit in something the size of a dust mote. If information could be condensed, Feynman then argued, so too could the information machine, the computer. Perhaps not aware that the integrated circuit had been invented earlier that year, Feynman suggested that tiny computers could be made by fabricating all the necessary wires and components using chemical techniques, to form a small, solid “block” containing all the necessary electronics.

But Feynman saw even more interesting possibilities, not in microelectronics but in micromachines. What if, he speculated, it were possible to construct tiny machines specially designed to, for instance, perform some simple surgical operation inside the body? Medicine would be revolutionized. In addition to micromachines, Feynman also believed that constructing useful things could be done at the atomic level, by manipulating individual atoms to arrange them however the engineer or scientist wanted. Then, he reasoned, compounds and chemicals for drugs or other purposes could be easily made, limited only by the imagination of the chemist. Feynman’s talk closed with a challenge to engineers to carry out some of the tasks that he had mentioned, specifically reducing printed information to a size that could only be read with an electron microscope and making a functional electric motor no larger than 1/64th of an inch square.

A version of Feynman’s lecture was published a few months later in the magazine Engineering and Science, but Feynman’s talk remained mostly forgotten, although some of his predictions for tiny computers were already being realized in the form of digital integrated circuits. In the 1980s, this largely forgotten article was rediscovered by budding physicist K. Eric Drexler, who greatly expanded on Feynman’s limited vision of tiny drills and lathes, microscopic toy automobiles, pin-head encyclopedias, miniaturized computer circuits, and customized chemicals. Drexler called his broader approach “nanotechnology,” but credited Feynman for the inspiration. While Feynman’s actual hypotheses and predictions have often been misconstrued as a sort of vision of the future, in reality his proposal was brief, vague, and founded on the technologies of the late 1950s. He nonetheless deserves credit for recognizing one of the most important technological trends of the late 20th century, one that promises to make the 21st century very interesting.

Retrieved from "https://ethw.org/w/index.php?title=Richard_Feynman_and_Micromachines&oldid=120296"
Categories:
This page was last edited on 28 September 2015, at 19:03.
About ETHW
Policies and disclaimers