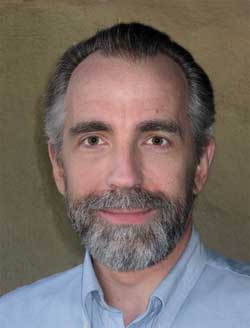 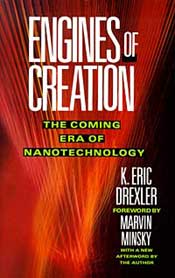 The cover of K. Eric Drexler’s Engines of Creation.

K. Eric Drexler is a scientist, policy advocate, and futurist who helped establish nanotechnology as a legitimate field of scientific and technical research. Drexler was born on 25 April 1955 in Oakland, California. A talented student, he enrolled at the Massachusetts Institute of Technology during the 1970s where he became interested in topics such as space exploration and cryogenics. It was during this time that Drexler also realized that it might be possible to imitate the functions of enzymes and ribosomes with tiny, molecule-sized machines. Theoretically, by building tiny machines that could then build other tiny machines, scientists might be able to construct any type of material, in any quantity. As Wired magazine noted, “giving humankind that ability became Drexler’s crusade” and he has pursued this goal ever since.

The possibility of nanotechnology and of building atomic-sized machines was first proposed in Richard Feynman’s famous 1959 lecture, but Drexler has done more than just about anyone to popularize the idea. In 1981 he published what is probably the first scientific paper on molecular engineering, and in 1986 he published Engines of Creation: The Coming Era of Nanotechnology, a widely influential book which introduced the basic concepts of nanotechnology to a general scientific audience for the first time. Since then, Drexler has been one of the leading figures in garnering support for the possibilities of nanotechnology, writing two additional books and numerous technical articles on the topic, testifying before Congress, and lecturing widely. In 1991 he received a Ph.D. from MIT in Molecular Nanotechnology, the first doctorate awarded in the field, and in 1988 he taught the first formal course on nanotechnology while a visiting scholar at Stanford University. In 1986 Drexler founded the Foresight Institute, a non-profit think tank dedicated to educating the public about the field of nanotechnology, shaping public policy, and working to ensure the beneficial implementation the newly emergent technology.

Drexler’s vision of the future possibilities of nanotechnology is truly breathtaking. In Engines of Creation, for example, he outlined what he sees as the amazing potential of molecular manufacturing to fundamentally transform the world. He writes that in time “we will be able to harvest solar power a trillion times greater than all the power now put to human use,” that “from the resources of our solar system, we will be able to create land area a million times that of Earth,” and that “cell repair technology will make perfect health and indefinitely long lives possible for everyone.” However, this sweeping vision has proved highly controversial. Many scientists feel that Drexler’s sweeping vision is closer to science fiction than actual science and undermines support for the actual development of nanotechnology. Most scientists also reject his technical arguments, believing there to be fundamental barriers to molecular manufacturing along the lines he proposes. In turn, Drexler considers most of the work done in the emergent field of nanotechnology to not really be nanotechnology at all, arguing that researchers in the field have simply taken the name and applied it to something completely different. Unfortunately, in recent years, the debate between the two sides has become increasingly bitter. In 2003, for example, Nobel Laureate Richard Smalley engaged in a well publicized debate with Drexler in the pages of Chemical and Engineering News which deteriorated into insults on both sides.

Drexler currently lives in Los Altos, California. His fundamental contribution to the early history of nanotechnology is widely recognized—Richard Smalley, for example, acknowledges that he first became interested in the possibilities of the field by reading Engines of Creation. In many ways, however, Drexler is as much a visionary as he is a scientist, and like many such thinkers throughout history he has found it difficult to reconcile his sweeping visions of what the world might become with the reality of what it actually is.

Retrieved from "https://ethw.org/w/index.php?title=K._Eric_Drexler&oldid=146411"
Categories:
This page was last edited on 2 February 2016, at 16:10.
About ETHW
Policies and disclaimers