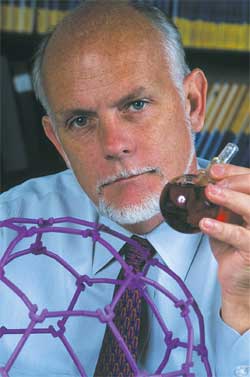 Richard E Smalley was a professor of chemistry, physics, and astronomy at Rice University. In 1996 he was awarded the Nobel Prize in Chemistry for the discovery of a new type of carbon, buckminsterfullerene. Smalley shared the Nobel Prize with Robert Curl, also a professor of chemistry at Rice, and the British chemist Sir Harold Kroto. He was one of the most highly respected scientists working in the emergent field of nanotechnology, and was well-known for his scientific work, his dedication to education, and his advocacy efforts on behalf of the new field.

Smalley was born in Akron, Ohio in 1943 to what he described as “a wonderfully stable, loving family of strong Midwestern values.” He received his B.S. in 1965 from the University of Michigan and a Ph.D. from Princeton University in 1973. He joined the faculty at Rice University in 1976 and, according to one colleague, rapidly became “a major intellectual force” at the school. He helped establish the Rice Quantum Institute in 1979, was named the Gene and Norman Hackerman Chair in Chemistry in 1982, and in 1990 was appointed a professor of physics. He also founded the Center for Nanoscale Science and Technology at Rice in 1993.

It is difficult to overestimate the importance of Smalley’s work to the field of nanotechnology. In 1985, he discovered a new elemental form of carbon that is shaped like a ball and that is just one nanometer, or one-billionth of a meter, in diameter. The atomic arrangement of the “buckyball,” as the molecule is frequently called, resembles two conjoined geodesic domes, leading Smalley to name it after Buckminster Fuller, the inventor of the geodesic dome. Before the discovery, carbon was thought to be one of the most stable of all elements, with just two elemental forms (diamond and graphite). Many scientists found the discovery of a third form astonishing, and its discovery is frequently cited as one of the most important discoveries in the development of nanotechnology. “In my view, this was a singular event in the history of nanotechnology,” argued one of Smalley’s colleagues. “It not only created a whole new field of ‘fullerene chemistry,’ it immediately made feasible the notion of making things from the bottom up, just as physicist Richard Feynman had predicted 50 years earlier.”

Smalley strongly believed that nanotechnology held the potential to solve humanity's most pressing problems, including the need for clean energy and clean water. In 1999 he was diagnosed with cancer in the lymphatic system, which later developed into leukemia. The same year, he testified before the U.S. House of Representatives in support of the National Nanotechnology Initiative, arguing that “These little nanothings, and the technology that assembles and manipulates them—nanotechnology—will revolutionize our industries and our lives.” According to James Heath, one of Smalley’s former students, his testimony was “riveting.” “He sat there in front of Congress with no hair, as a result of the chemotherapy, and talked about the promise of nanotechnology for cancer and other diseases and how it would pay off for his children... it must have been something else.” Partially as a result of Smalley’s efforts, in 2000 the United States began to invest heavily in nanotechnology R&D.

Smalley also held a strong commitment to both teaching and public education. As late as 1996 he was still teaching undergraduate courses in chemistry, and throughout his career he worked to translate scientific knowledge in language that laymen could understand. In the last years of his life he gave numerous public lectures about nanotechnology’s potential benefits to society. However, he also strongly criticized what he saw as exaggerated claims made by some about its potential benefits, including those made by K. Eric Drexler. In addition to the Nobel Prize, Smalley was the recipient of numerous other honors, including the Franklin Medal from the Committee on Science and the Arts of The Franklin Institute (1996) and the Distinguished Civilian Public Service Award (1997) from the Department of the Navy.

Richard Smalley died on 28 October 2005, after a six year struggle with cancer. David Leebron, President of Rice University, remembered him by noting that “his extraordinary scientific contributions, recognized with the Nobel Prize, will form the foundation of new technologies that will improve life for millions. His life’s work and his brave fight against a terrible disease were an inspiration to all.”

Retrieved from "https://ethw.org/w/index.php?title=Richard_E._Smalley&oldid=146937"
Categories:
This page was last edited on 24 February 2016, at 18:56.
About ETHW
Policies and disclaimers