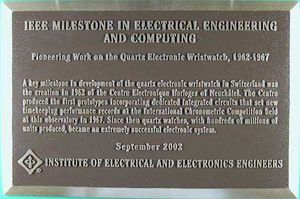 A key milestone in development of the quartz electronic wristwatch in Switzerland was the creation in 1962 of the Centre Electronique Horloger of Neuchâtel. The Centre produced the first prototypes incorporating dedicated integrated circuits that set new timekeeping performance records at the International Chronometric Competition held at this observatory in 1967. Since then quartz watches, with hundreds of millions of units produced, became an extremely successful electronic system.

The plaque can be viewed at the Cantonal Observatory of Neuchatel, Switzerland, on the Rue de l'Observatoire 58.

In 1962 the Centre Electronique Horloger (CEH) was founded with the intent to design a new generation of wristwatches for mass production. For centuries watches had been mechanical in nature, composed of intricate moving parts powered by an unwinding spring. The introduction of the battery-driven watch was revolutionary in nature. It incorporated the "new" integrated circuit. The first prototype, Beta 21 (as seen above) was introduced in 1967. Members of CEH were responsible for a specific component of the watch. CEH's prototypes rated a new precision record for time accuracy, off only a few tenths of a second per day. The task of mass producing the watch was divided among several companies to speed the process along. The first 1,000 Beta 21 quartz watches became available on 10 April 1970, under brand names of 16 different Swiss watch companies. These watches maintained the traditional round dial with twelve numerals. In later years the LED (light-emitting diode) digital wristwatch was introduced. The time was displayed by touching a button on the side of the watch. This was improved with the introduction of the LCD (liquid crystal display) digital display providing continuous readout.

By 2002, digital watches had become so popular that mechanical watches made up only thirteen percent of the world watch market.