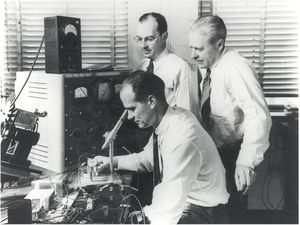 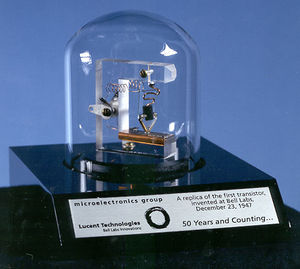 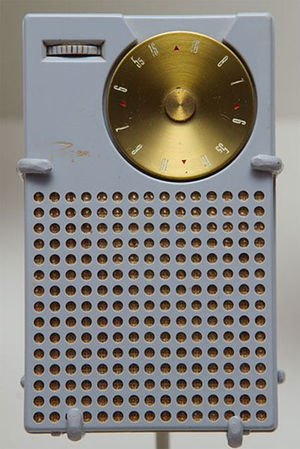 23 December 1947 was a snowy early winter day at Bell Telephone Laboratories in Murray Hill, N.J. A group of senior Bell Labs scientists and administrators gathered in a laboratory where physicists John Bardeen and Walter Brattain were about to demonstrate the first solid state amplifier, the point-contact transistor. They switched their invention in and out of an audio circuit, so those gathered could clearly hear the sound being amplified. And unlike vacuum tubes (the then-standard electronic device), the amplification was instantaneous; no warm-up time was required.

This first demonstration was just one milestone on a research trajectory that had its start back in 1936. Mervin Kelly, then newly promoted to the post of Director of Research, decided to form a research group on solid-state physics. His hope was that a program of basic research in this area would lead to solid state electronic replacements for both the millions of moving, clanking electromechanical relays that were the chief components of telephone switches, and the bulky, hot, fragile vacuum tubes used to amplify telephone signals. Kelly’s very first hire as research director was for this program, a young theoretical physicist from MIT, William Shockley. Shockley and a handful of colleagues began working on the problem, concentrating on theoretical work and on well understood semiconductors such as copper oxide. In 1940-1941, this project, along with almost everything else at Bell Labs, was put aside for war work.

Kelly reactivated the solid state amplifier/switch project in 1945, creating a new and larger group under the direction of Shockley and chemist Stanley Morgan, and including experimental physicist Walter Brattain and newly hired theoretical physicist John Bardeen. Now the work focused on the semiconductor elements germanium and silicon, because understanding of these had advanced greatly during the war from their development as crystal diode rectifiers in radar. Shockley’s own efforts focused on the field-effect, while Bardeen and Brattain investigated ways to reduce the effects of surface states to make a viable solid-state device. Bardeen and Brattain were the first to succeed, On 16 December 1947, they for the first time amplified an electrical signal with a solid state device, a point-contact semiconductor amplifier. Bell Labs soon named the device the “transistor.” It was this device they showed to Labs leadership the next week.

On 30 June 1948, Bell Labs held a press conference in New York to introduce the transistor. The revolutionary importance of the invention was not apparent to all attending. The New York Times covered the story in a few paragraphs on page 46 at the end of a column titled “The News of Radio.” The technical press was far more receptive. Electronics devoted its cover to a picture of Shockley, Brattain, and Bardeen, with a caption “Revolutionary amplifier: the crystal triode.”

Transforming a laboratory discovery into something commercially viable proved at least as big a job as the invention itself. Kelly established up a transistor development program under Jack Morton, who set up an experimental production line to learn how to make transistors and provide samples to meet the demand from potential military and civilian users. In the Chemical Research Department, Gordon Teal developed a crystal pulling technique to produce the high-purity germanium needed. In 1950-1951, William Pfann followed this with a zone-refining method to produce crystalline germanium of even higher purity. Morton’s group succeeded in solving the problems of commercial production. On 1 October 1951, AT&T’s manufacturing subsidiary, Western Electric, opened the first commercial transistor production line in Allentown, Pennsylvania. (Both the first commercial line as well as the original invention have been recognized as IEEE Milestones, with the formal dedication of the latter to take place at Bell Labs in December 2009.)

AT&T (Bell Labs’ parent) freely licensed the transistor to other companies for a modest fee of $25,000 as an advance against royalties. Bell Labs held two transistor symposia for the licensees. The first, in September 1951, shared know-how on the transistor; the second the following April, extended the know-how to manufacturing techniques. Bell Labs developed other types of transistors. It held a press conference in 1951 to announce Shockley’s junction transistor, which was easier to manufacture and use.

After 1951, transistors began to be appear in end products. Many of the initial uses were military, where the need for reduced size and weight justified the much higher cost of transistors. Early military applications included data transmitters for radar systems. AT&T’s first in-house use was in a card translator, a device used to automatically route long distance calls, in 1954. Hearing aids, in 1952, were the first consumer application. But it was the transistor radio that captured the public imagination. At General Electric, Arthur Stern (later 1975 IEEE President) demonstrated a prototype in 1953. A team from Texas Instruments, working with a small consumer electronics firm, the IDEA corporation, introduced the first commercial transistor radio, the Regency T1, in time for the 1954 holiday season. Shockley, Bardeen and Brattain shared the 1956 Nobel Prize in Physics for their work.

Through all this research, development and commercialization, Bell Labs never forgot the reason it first undertook solid state research back in 1936. In 1965, AT&T installed the world’s first commercial electronic telephone switch, the #1 ESS, in a telephone exchange in Succasunna, N.J.. Almost thirty years had passed, and an electronics revolution achieved, but in one sense, at least the project was finally complete.

A Very Early Conception of a Solid State Device

Retrieved from "https://ethw.org/w/index.php?title=Bell_Demonstrates_Transistor&oldid=172482"
Categories:
This page was last edited on 10 January 2019, at 20:03.
About ETHW
Policies and disclaimers