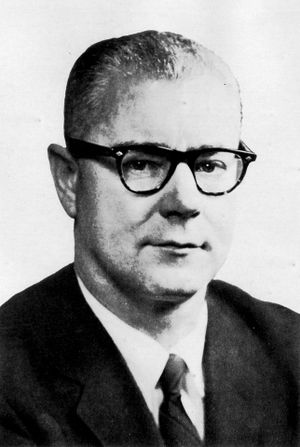 Jack A. Morton was born on September 4, 1913 in St. Louis, Missouri. He received the B.S. degree in electrical engineering from Wayne University in 1935 and the M.S. degree in engineering from the University of Michigan in 1936. Dr. Morton joined Bell Telephone Laboratories in 1936 and continued part-time post graduate studies in physics at Columbia University until 1941. He was elected vice president of all electronic component development for Bell Laboratories in 1958.

During World War II, Dr. Morton, one of America's leading engineers, concentrated on the development of radar receivers. After the war, he invented and developed the microwave tube which is the heart of the transcontinental radio relay system for telephone and television transmission.

Dr. Morton has been awarded the Honorary Doctor of Science degree by Ohio State University in 1954 and his alma mater, Wayne University, in 1956. In 1948 he received an honorable mention award from Eta Kappa Nu, and in 1951 a University Alumni Award from Wayne University for "distinguished service and accomplishment in science." In 1953 at the University of Michigan Centennial he was cited for his contributions to science. He was the author of numerous technical articles, holds fourteen patents, has served on many technical committees and was a Fellow of IEEE. He also serves in an advisory capacity at Penn State University and in the graduate study program of Bell Telephone Laboratories.

Jack Morton lived with his wife Helen, and younger son, Mack, in a 200-year old house in a farming community near South Branch, New Jersey. Probably the outstanding characteristic of Jack Morton was an insatiable driving energy which carries over into all of his activities. He was an avid reader and enjoys hunting, fishing and power boating, his latest hobby.