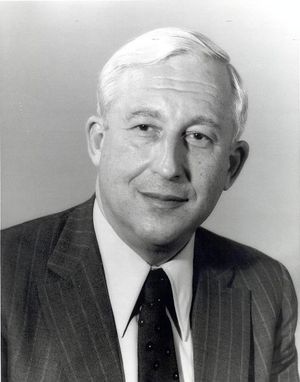 Arthur P. Stern, IEEE President, 1975, pioneered color television while he worked at General Electric. He later became vice chairman of Magnavox, and he served as the president of Magnavox’s Advanced Products and Systems Company. 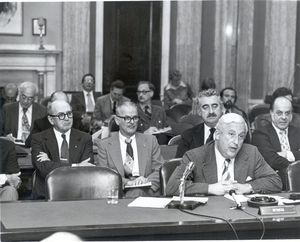 Born in 1925 in Budapest, Hungary, Arthur Stern attended rabbinical seminaries and the University of Budapest. In 1944, he was deported to concentration camp Bergen Belsen. Upon liberation, he attended the Universities of Lausanne and Geneva and earned a Dipl. Ing. degree in Electrical Engineering in 1948, at the Swiss Federal Institute of Technology, Zurich, Switzerland, where he later became an instructor. In 1955, he obtained an M.E.E. from Syracuse University.

He came to America and joined General Electric in 1951, where he pioneered in color television. He published the first technical paper on transistor radios, did seminal work in transistor circuits, and led GE’s initial efforts in integrated circuits. He left GE to become Engineering Director of Martin Marietta’s Electronics Division, and later Operations Director of its subsidiary Bunker-Ramo Corp. He became Vice President of The Magnavox Company in 1966, where he guided development of spread spectrum systems and led the introduction of satellite navigation to commercial ships and to navies worldwide. He was a leader in developing key elements of the Global Positioning System. He retired in 1991 as Vice Chairman of Magnavox and President of Magnavox Advanced Products and Systems Company.

For fifty years, Arthur P. Stern’s efforts have been dedicated to IEEE and its predecessors, IRE and AIEE. He has served in many capacities, including as Director and Officer from 1970 to 1977, and as President of the IEEE in 1975. In these roles, he worked to strengthen the Institute’s technical activities, its relations with industry, and its evolving professional endeavors.  A founder and Chairman of the International Solid-State Circuits Conference, he held most offices, including President of the Circuits and Systems Society. He chaired AIEE’s Electronic Circuits Committee and participated in the trail-blazing IRE Committee 4.1 on Solid-State Circuits. He chaired numerous Committees, including Long Range Planning, Transnational Activities and US Competitiveness and served on the Awards Board. He was Guest Editor of the Proceedings and of the Transactions on Circuit Theory. A Fellow of the IEEE, he is a recipient the IEEE Centennial and Millennium Medals. He is a Fellow of American Association for the Advancement of Science.

There are two oral histories by Arthur Stern. The 1993 Oral History covers his career. The 2009 oral history examines IEEE events and history and his role in them.

Retrieved from "https://ethw.org/w/index.php?title=Arthur_P._Stern&oldid=158531"
Categories:
This page was last edited on 7 February 2018, at 22:31.
About ETHW
Policies and disclaimers