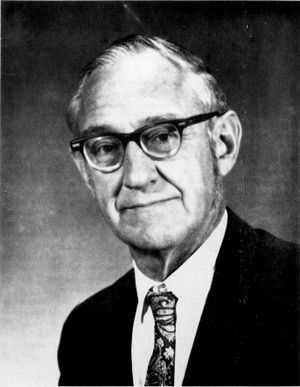 Chester H. Page was born in Providence, R.I. in 1912. He received his A.B. and Sc.M. degrees from Brown University in 1934 and his Ph.D. in physics from Yale University in 1937. From 1937 to 1941 he was instructor and then assistant professor of physics at Lafayette College. He joined the National Bureau of Standards in 1941 and contributed significantly to the development of the proximity fuse. In 1945 he became chief of the Ordnance Research Setion, and in 1947 headed the Electronic Computer Section, where he helped direct the development of SEAC, one of the first fully-electronic digital computers. He became electronics consultant in 1948. From 1953 to 1960 he was consultant to the Director of the Bureau and taught in the NBS Graduate School.

Since 1960, he has been chief of the Electricity Division, which establishes, maintains and disseminates the electrical units for the USA. Under his leadership NBS has been in the forefront of major advances in the methods of determining these units. For over 10 years he has represented the USA on some of the most important national and international committees on electrical quantities, symbols and measurements.

Dr. Page has written two technical books and over 30 papers, and has 3 patents. He was a Fellow of IEEE, the American Physical Society and the Washington Academy of Sciences, and was a member and past president of the Philosophical Society of Washington. He served as editor of the Journal of the Washington Academy and of the NBS Journal of Research, was chairman of the former IRE Standards Committee, Circuits Committee, and Professional Group on Circuit Theory, and was an active member of the IEEE Standards Committee.

Dr. Page has received two Gold Medals (the highest awards) from the Department of Commerce, for outstanding contributions to the creation of SEAC and to the Nation in the fields of electronics, ordnance , physical research and measurement, including distinguished authorship.

"Chet" as he was known to his many friends throughout the world, married Corrella Pinkham in 1940, the culmination of a friendship that started in their teens. Two daughters and a son have enlivened the household. Marlys was a teacher in the chemistry department at St. Paul High School in Minnesota; Cynthia, who gave up her profession as a dental assistant, was married and a mother of two boys; and Jeff, the youngest, was a Brown graduate with a major in Psychology.

Chet, with a broad range of interests, has had many hobbies. He became enamored of the "wireless" while in high school and was very active as a "ham" operator, a period that extended through his teaching years at Lafayette. His house in Maryland with its 2-1/2 acres , where they have lived for nearly 23 years, has helped initiate other hobbies. Raising bees and making mead, a honey wine, spanned several years until he became captivated with the growing of the grape. His vineyard, has 15 varieties of wine grapes and perhaps one variety of eating grapes. He was an active member of the Washington branch of the American Wine Society. In such time that he can spare from his oenology activities, he spins pewter in his basement workshop, providing wine cups, goblets, bowls and the like that are in demand by friends and neighbors.

Retrieved from "https://ethw.org/w/index.php?title=Chester_H._Page&oldid=172280"
Categories:
This page was last edited on 4 January 2019, at 20:28.
About ETHW
Policies and disclaimers