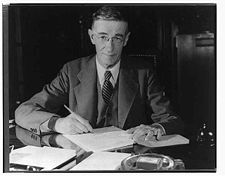 During World War II, Vannevar Bush was the most prominent engineer in the United States. He headed the national research-and-development effort, first as chair of the National Defense Research Committee and then as director of the Office of Scientific Research and Development. Born on 11 March 1890, Bush was educated at prestigious schools across the nation, including Tufts, Harvard and MIT. In 1919, he joined the faculty of MIT, and that institution named him Dean of Engineering in 1932. In June 1940-- when Germany had overrun most of Western Europe, and it appeared likely the United States would be drawn into the war-- Bush presented to President Franklin Roosevelt a plan for an independent agency, the National Defense Research Committee, to coordinate military research. Roosevelt approved it immediately, and it became the principal means of organizing military R&D in the United States, with Bush serving as its chair.

The war institutionalized the research contract. Traditionally, the military contracted for equipment or parts. Here, it was research and development, but not production, that was contracted for. Bush insisted on this arrangement as a way of allowing universities and industrial research laboratories to continue to function much as they had earlier, and to retain a large degree of independence from the military. Bush jokingly describe his positiond after the war, in which he had to deal with "political or bull-headed generals and admirals" on an everyday basis, as that of a "child psychologist."

After the war, he proselytized for continued government support of research, notably through his report Science: The Endless Frontier, published in July 1945. Bush, and his report, played a large part in establishing the National Science Foundation in 1950. He was an vocal advocate of what is referred to by President Eisenhower in his Farewell Address as the "Military-Industrial Complex."

Bush made many other contributions to engineering. He was an outstanding educator, and a 1922 textbook he and William Timbie wrote, Principles of Electrical Engineering, became a standard introduction to EE education, appearing in four editions in the United States and in translation in other countries. Bush was also a computer pioneer. His study of the behavior of electric-power networks, which made great calculational demands, led him to develop a series of electromechanical analog computers, including the so-called Rockefeller Differential Analyzer, used during World War II to calculate ballistic tables and study radar and fire-control systems. And Bush worked on techniques of information retrieval, including the so-called Rapid Selector that allowed microfilmed information to be located rapidly through a binary code on the edge of the microfilm that could be read automatically.

Bush served as president of the Carnegie Institution from 1939 to 1955. In 1949, he published the widely discussed Modern Arms and Free Men: A Discussion of the Role of Science in Preserving Democracy. After his retirement in 1955, he served on the boards of several companies. The American Institute of Electrical Engineers awarded Bush the Edison Medal in 1943; Eta Kappa Nu named him an Eminent Member in 1950; and President Lyndon Johnson presented him with the National Medal of Science in 1964. Bush died in Belmont, Massachusetts, on 28 June 1974. He was remembered as having "hard-boiled Yankee shrewdness and driving energy."

Retrieved from "https://ethw.org/w/index.php?title=Vannevar_Bush&oldid=147339"
Categories:
This page was last edited on 1 March 2016, at 15:57.
About ETHW
Policies and disclaimers