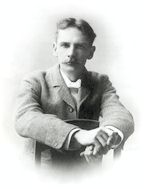 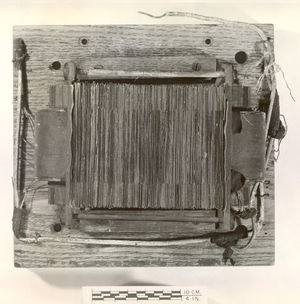 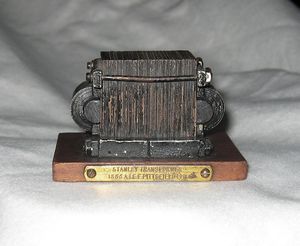 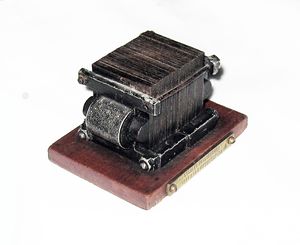 Photo credit: Richard Warren Lipack / Wikimedia Commons. Depicted is 3/4 angle view showing other details of the Stanley transformer model given to attendees at the 1911 A.I.E.E. event in Pittsfield, Mass.

William Stanley was born in Brooklyn, New York, 22 November 1858, the son of William and Elizabeth A. Parsons Stanley. Part of his youth was spent in Great Barrington with his grandparents William and Clara Wadhams Stanley. He attended schools in Great Barrington and in Bridgeport, Connecticut, where his family later lived. As a young man, he attended Williston Academy in East Hampton, Massachusetts, graduating in 1877. He entered Yale the year Thomas Edison invented the incandescent electric lamp, 1879, following in his father's study of law. Disenchanted with college after only part of a semester, he went to New York. With a $2,000 loan from his father he purchased an interest in an electroplating company and made a profit. In 1880 Stanley went to work as an assistant to inventor Hiram Maxim at the United States Electric Company, a manufacturer of electric lamps. Mobile in this new field, two years later he was working for Swan Electric Company of Boston, also manufacturing electric lamps. 1883 to 1884 was spent in a private laboratory in Englewood, New Jersey.

Stanley held ten patents pertaining to the electric lamp and its manufacture by 1885. On the strength of the background of this work, in 1884 he was contracted by H. H. Westinghouse to develop a lamp manufacturing facility at Westinghouse's Pittsburgh plant. While working for Westinghouse, Stanley had access to the British Gaulard & Gibbs system of induction coils on which Westinghouse had taken an option. The prevailing power system of the day was the Edison Direct Current (dc) system. Its low voltage (100/220 volts) and large conductors made it impossible to distribute current over distances greater than a mile without high resistance and voltage drops. Stanley recognized the weakness of the Gaulard & Gibbs system as not being self-regulating, because its induction coils were wired in series. Using a parallel circuit allowed the potential (voltage) to be constant and inherently self-regulating. His discovery of this effect appears in a notebook entry of September 18, 1883.

Westinghouse and his associate Franklin L. Pope tried without success to discourage young Stanley. Alternating Current (ac) transmission at high voltages (500-1000 volts) required greater insulation and was dangerous. Discouraged about acceptance of his theory and in ill health, Stanley returned to Great Barrington in April, 1885, to spend the summer, but was determined to develop his own plant and prove his views. Securing a lease on the 'Old Rubber Factory" south of Cottage Street in November, 1885, Stanley spent the winter building and winding the first 19 transformers. Powered by a 25 h.p. Westinghouse automatic steam engine and energized by a 500 volt Siemens alternator, borrowed from George Westinghouse, the system was wired to transmit current at 500 volts along two no. 6 wires the length of Main Street. Voltages were reduced to 100 volts by Stanley's "exhorter," or transformers, to power incandescent lamps of 16, 50, & 150 candle power in the businesses of 25 subscribers. The system was tried on March 6th, 1886, and officially tested on March 16th, 1886. The system was an instant success, but it would also drive Stanley and Westinghouse farther apart, since they disagreed on main points such as what Stanley had done and what he should get for it.

In 1890 Stanley decided to sever his ties with Westinghouse. With John Kelly and Cummings C. Chesney, Stanley formed the Stanley Manufacturing Company, and focused on the area he had pioneered: transformers. The company soon was involved in the biggest power-transmissions jobs in California, and by the late 1890s it had become a valuable and profitable business.

Stanley and GE discovered, in 1906, the arrangement that today we call a golden parachute. GE bought twenty-two of Stanley's patents, and offered him a healthy salary plus support for a new laboratory, where Stanley could spend half of his time working for GE and devote the other half to new business --as long as they were not in "conflict with GE." Stanley chose as his own business the manufacturing of thermos bottles, which still today say Stanley, a trade name now belonging to the Tennessee company that makes them.

Retrieved from "https://ethw.org/w/index.php?title=William_Stanley&oldid=155857"
Categories:
This page was last edited on 8 August 2017, at 03:00.
About ETHW
Policies and disclaimers