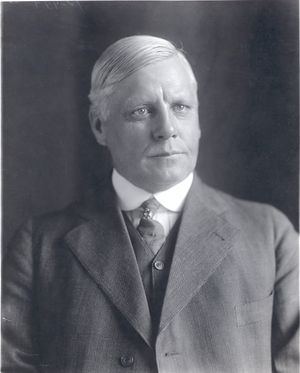 Cummings Colineer Chesney was born in Selinsgrove, Pennsylvania, 28 October 1863. Chesney graduated with a B.S. from Pennsylvania State College in 1885. Subsequently he taught mathematics and chemistry there and at the Doylestown (PA) Seminary. In 1888 he became a member of the laboratory staff of William Stanley Jr. at Great Barrington, Massachusetts. He served as chemist and engineer, devoting himself particularly to experimental chemistry and electric dynamics for a year, and when Stanley joined the United States Lighting Co., Newark, N.,T., a subsidiary of the Westinghouse Electric & Manufacturing Co., Chesney continued with them.

The Stanley Electric Manufacturing Co. was organized to develop the patent in the alternating current field awarded to William Stanley, John F. Kelly, and Chesney, who were pioneers in that branch of electricity. Chesney's work was to supervise design of equipment and to put into practical use the ideas of his associates, so that manufacturing on a commercial scale could be carried on successfully with their alternating current induction motor. This company built the first revolving field type of alternator used in America. It specialized in long distance transmission of power by alternating current and was the first in this country to use high tension underground cables for this purpose. The company introduced the electrical industry static condensers for regulation purposes and power factor production. The first polyphase transmission plant to be equipped with SKC system in successful operation was installed in 1893 to supply power and light to the towns of Housatonic and Great Barrington, and soon became standard worldwide. Under Chesney's supervision as manager of the General Electric Co., notable progress was made in the development of alternating current motors, oxide film lightening, induction regulators, and high voltage transformers for commercial service up to 220,000 volts. In addition GE also completed experimental transformers capable of producing up to 5,000,000 volts.

Besides his engineering interests, Chesney started a home building plan at the local works which made it possible for more than 300 employees to own their own homes. He was president of the Pittsfield Morris Plan Bank during 1931-35, of the Berkshire Trust Co. during 1934-37, and of the Pittsfield Coal and Gas Co. He was a director of the Boston & Albany Railroad Co., General Electric Employees Securities Corp., Massachusetts Mutual Life Insurance Co., Sentinel Fire Insurance Co., Agricultural National Bank of Pittsfield, and the Union Federal Savings & Loan Association. He was a director of the Pittsfield Boy's Club and a trustee of the Berkshire County Home for Crippled Children.

Chesney was a Fellow of the American Institute of Electrical Engineers (serving its president in 1926), and belonged to the American Association for the Advancement of Science, Engineering Society of Western Massachusetts, Institute of Metals of London, and the Royal Society of Arts, London. He was also a member of Phi Kappa Sigma, the Mohawk Club of Schenectady, N.Y., Pittsfield, and the Union League Club of New York city. He received the AIEE Edison Medal in 1921, "For early developments in alternating current transmission."

Chesney enjoyed the outdoors, mountain climbing, gardening, golf and baseball. He was married in East Orange, NJ, 28 October 1891, to Elizabeth Cutler, and they had five children, Malcom, Elizabeth, Margaret, Katherine, and Barbara. Chesney died on 27 November 1947.

Retrieved from "https://ethw.org/w/index.php?title=Cummings_C._Chesney&oldid=173698"
Categories:
This page was last edited on 14 February 2019, at 20:28.
About ETHW
Policies and disclaimers