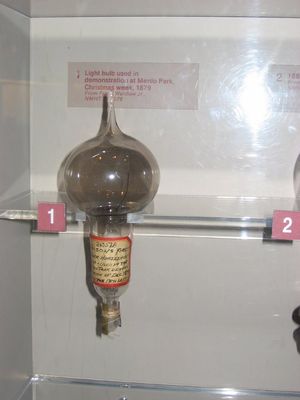 Inventor Thomas Edison of Menlo Park, New Jersey first patented his carbon-filament lamp on 1 November 1879. His laboratory first produced promising results for this electrical lamp on 21 October 1879: a glowing carbonized thread which lasted for more than fourteen hours. Publicly demonstrating this invention at Menlo Park on 31 December 1879, Edison is known to many as the “inventor of the electric light bulb”. However, he is not the inventor of the light bulb, but rather the inventor of the first effective and commercially viable one.

Early electric light experimentation dates back as far as 1802, with many other inventors working on the task prior to, during, and after Edison’s own work.

British inventors first demonstrated the possibility of electric light with the arc lamp; a lamp which produced light via an electric arc. Created by Humphrey Davy in 1802, the first instance incandescent light was demonstrated by passing a current through a thin strip of platinum; a metal chosen because of its high melting point. Although it was not very bright or effective as a long-term lighting solution, it created the precedent for the years of scientists' and inventors' efforts which followed it.

In the years following Davy’s invention, many inventors experimented with various materials and constructions for a lamp's wires, filaments, and bulb enclosures. In addition to a short lifespan, these early bulbs were expensive and energy ineffective. While many of these experiments were demonstrated to the public, and several were patented prior to Edison, none were successful at achieving commercial production.

The first instance of an incandescent light bulb, although not well-documented, was in 1835. James Bowman Lindsay publicly demonstrated the first constant electric light in Dundee, Scotland. His device allowed him to read at a distance of one and half feet from the light source. While his incandescent light bulb showed promising results, having satisfied his own requirements for the light he did not improve the bulb further, instead focusing on developing wireless telegraphy.

In 1840, British scientist Warren de la Rue passed an electric current through an enclosed coiled platinum filament in a vacuum tube. The choice of platinum was based on its high melting point which allowed for high temperature operations, while the vacuum tube allowed for less reactivity with the platinum, improving the filament's lifespan. Although the bulb’s design demonstrated an effective construction, the platinum filament’s high cost made it impractical for commercial production. In 1841, Frederick de Moleyns was given the first patent for an incandescent bulb, which similarly utilized platinum within a vacuum bulb.

A patent was later granted to the American inventor, John W. Starr, for his design for an incandescent light bulb which used carbon filaments. Following his grant of the patent, however, Starr died and his invention never made it to commercial production. Russian inventor Alexander Lodygin similarly invented an incandescent light bulb which utilized carbon rods in a vacuum tube in 1872; he gained a Russian patent for it in 1874. Situated within a glass enclosure, two carbon rods were sealed in with nitrogen and arranged such that in the event that one failed, the electrical current would be passed on to the other. Lodygin later moved to the United States and applied for and received patents for incandescent lamp designs which included filaments of chromium, iridium, tungsten, and many other metals.

In 1893, Heinrich Göbel claimed to have invented the first incandescent light bulb in 1854. His design supposedly consisted of thin, high resistance carbonized bamboo filaments, platinum lead-in wires, a glass enclosure, and a high vacuum. His claims, however, were never confirmed and, in fact, discredited in 2007.

On 24 July 1874 Henry Woodward and Mathew Evans obtained a Canadian patent for an incandescent lamp which consisted of carbon rods mounted in a nitrogen-filled glass bulb. While an effective design, the pair was unsuccessful and commercializing their light bulb and sold the patent rights to Thomas Edison in 1879.

In 1850, Swan began working with carbonized paper filaments enclosed in evacuated glass bulbs. By 1860, he demonstrated a good working device, but he lacked sufficient vacuum and an adequate supply of electricity, which resulted in a short lifespan for the bulb and an ineffective light source.

By the mid-1870s, better vacuum pumps were created which allowed for modifications to his original design. In 1878, with the help of vacuum pump expert, Charles Stern, Swan developed a bulb production process which avoided the bulb blackening of early designs, obtaining a British patent in 1880.

Swan first demonstrated a new bulb design which used the carbon rods from arc lamps, rather than a thin filament. Because of this design change, the lower resistance filaments required larger conductors in order to supply the necessary current. While impractical for commercial production and having a short lifespan, the bulb design demonstrated the possibilities of incandescent lighting, high vacuum, carbon conductors, and platinum wiring.

The inefficiency of the carbon filament led Swan to experiment with the production of a better one; he began treating cotton in order to produce a “parchmentised thread”, gaining a British patent in 1880. This new carbon filament allowed Swan to begin installing light bulbs in homes and British landmarks that same year, providing lighting for his own house, and even the Savoy Theater, which became the first theater and the first public building to be lit entirely by electricity.

In the 1870s, like many other inventors of the time, Thomas Edison witnessed the illumination of the popular arc light. While useful for street lamps and providing lighting for factories, stores, and other large areas, Edison perceived the need for incandescent electric lights to provide suitable light for homes and smaller areas; particularly a high resistance system which would require far less electrical power than arc lamps. Edison focused, however, on the development of the phonograph until 1878, when a Western Union attorney, Mr. G. P. Lowrey, challenged him to experiment with the electric light and invent a practical incandescent light bulb.

Following this challenge Edison started experimenting with the idea of a practical incandescent lamp, drawing inspiration from William Wallace and Moses Farmer. By 4 October 1878 he filed his first patent application for the “Improvement in Electric Lights”. During the early 1880s, he began experimenting with carbon, platinum, and other metals before returning to the idea of carbon filaments. He tested one, lasting 13.5 hours, on 22 October 1879.

On 4 November 1879, improvements to the initial design eventually led him to file a U.S. patent for an electric lamp which used “a carbon filament or strip coiled and connected . . . to platina contact wires”, or “cotton and linen thread, wood splints, papers” as possible filaments; the application was quickly granted on 27 January 1880. Later Edison would discover the utility of carbonized bamboo as a filament lasting more than 1,200 hours, which became the standard for Edison bulbs for the next ten years.

Commercial production of incandescent lamps was delayed by the lack of a sufficient vacuum pump and of an efficient filament. By the late 1800s an adequate vacuum pump and sufficient filament was developed independently by Swan (1878) and Edison (1879). By 1880 both men had applied for patents for their designs, and litigation between them eventually led to the formation of joint company in 1883. Despite Swan having invented his version of the incandescent lamp a year prior, Edison is often credited with the invention of the light bulb. There are three factors that may have contributed to Edison’s success over Swan: development of a more durable incandescent material, better elimination of air from the bulb by the creation of a vacuum through use of the Sprengel pump, and a filament material with a higher resistance which promoted economically efficient power distribution.

Edison’s development of the power system and other electrical equipment helped to establish an adequate and practical lighting system in which the incandescent lamp could operate, making it easier for society to adopt the technology. Edison modeled his lighting technology on the existing gas lighting system. In London in 1882 he demonstrated the distribution of electricity from a central generation center through a series of wires and tubes, known as conduits. Additionally, he improved electricity generation by developing the first commercial power utility, the Pearl Street station located in lower Manhattan. He also created the first electric meter in order to track individual consumer consumption.

At the time of his death in October 1931, the electric and lighting industries were worth five billion dollars a year in the United States alone.

Retrieved from "https://ethw.org/w/index.php?title=Edison%27s_Incandescent_Lamp&oldid=181066"
Categories:
This page was last edited on 25 August 2020, at 02:40.
About ETHW
Policies and disclaimers