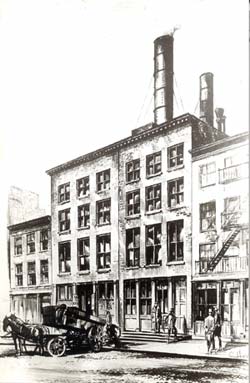 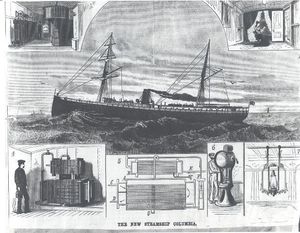 Electric Systems in the Steamship Columbia 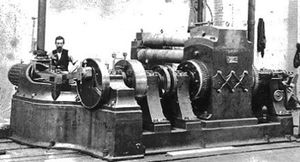 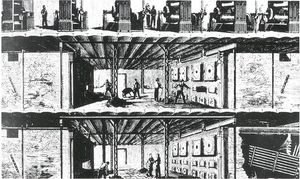 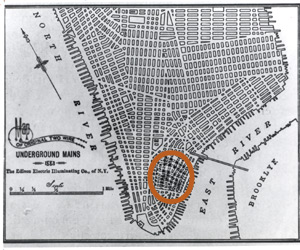 With the opening of the Pearl Street station in lower Manhattan at 3 o'clock in the afternoon on 4 September 1882, Thomas Edison publicly presented a complete system of commercial electric lighting and power. The success of the Edison bulb created a demand for a source of power. It was this demand that led to the construction of the Pearl Street station and launched the modern electric utility industry. The Pearl Street station featured reliable central power generation, safe and efficient distribution, and a successful end use (that is, his long-lasting incandescent light bulb) at a price that competed with gas lighting.

Prior to setting up Pearl Street, Edison set up several experimental power installations. In 1880 he installed a small system on the steamship Columbia as well as a small lighting system at his Menlo Park lab. Lighting systems with other features were also installed at the Paris International Exposition and in London in 1881. These earlier installations gave Edison’s team the opportunity to try new ideas before making the first permanent installation in New York. In Menlo Park, for example, Edison tested his steam dynamos, safety fuses, and regulating devices, all of which would be major features of the Pearl Street plant.

Despite those experiments, however, construction of the Pearl Street plant presented new obstacles. One was finding a way to generate enough power. Edison wanted to use a dynamo (today called a generator), a machine that converts mechanical energy into electrical energy. But no dynamos at that time were powerful enough. To solve this problem, Edison developed the “Jumbo” dynamo, a 27-ton machine that produced 100 kilowatts, enough to power 1200 lights. This was four times the size of any previously available dynamo. A single Jumbo dynamo was first used at the demonstration of the Edison system at the Paris Expo. Six Jumbo dynamos were needed to light up the one square mile of New York City serviced by the Pearl Street plant.

While supplying electricity was a major problem, perhaps the greatest challenge was building the elaborate network of wires and underground tubes (called “conduits”) needed to deliver energy to customers. New York City politicians were initially skeptical and rejected Edison’s proposal to dig up the streets of lower Manhattan to install the needed 100,000 feet of wiring. Eventually, however, Edison was able to convince the mayor of the city otherwise. The conduit installation proved to be one of the most expensive parts of the whole project.

Yet another obstacle was devising a way of tracking energy consumption so that customers could be charged for the exact amount of power they used. Since the early 1800s there had been special instruments to detect the flow of a current and indicate how much of it was flowing, but there was not an instrument to record that flow over time. Not until the spring of 1882 was a successful design for an electric meter available. However, Edison did not send bills to his customers until the whole system was running reliably, which took some more time. The first electric bill was sent to the Ansonia brass and copper company on 18 January 1883 and was for $50.44. There were other costs to customers as well—light bulbs themselves cost $1.00 each, a high price in the 1880s.

Despite all the obstacles, the Pearl Street system worked well. The offices of The New York Times were among the first to get the new system. They reported that that light was “soft, mellow, grateful to the eye,” as compared to arc lighting, which was the only form of electric lighting before that time.

Behind the scenes, however, things were not always what Edison hoped. The public remained unaware that the Pearl Street system was a money-losing business for several years. Its initial cost had been high. Including the cost of Manhattan real estate, the power station and all the wires, underground conduits, and other fixtures, the system cost about $300,000 to build. In addition to the construction costs, there were ongoing operating expenses, such as the huge amount of coal that had to be fed into the plant’s boilers to generate steam for the dynamos. Pearl Street’s operating expenses were higher than its income in 1882 and 1883. It finally became profitable in 1884.

In some ways Pearl Street was a victim of its own success. Edison’s system created a demand for energy over greater distances, which was very expensive. There was also increasing demand from industry for power in voltages other than the 110 volts used for lighting. The Edison system, which used direct current (DC), was ill-suited to meet these new demands. Competitors, such as Nikola Tesla and his ally, George Westinghouse, believed that alternating current (AC) provided the answer to these demands. Edison was reluctant to acknowledge the limitations of DC power and began an intense defense of it. Ultimately, however, Edison was proven wrong and the world turned to AC to meet its energy demands.

Although AC power was growing in usage, Pearl Street station operated successfully until a fire broke out on the morning of 2 January 1890. It destroyed all but one of the Jumbo dynamos. This remaining unit is preserved today at the Henry Ford Museum and Greenfield Village, and was designated a National Historic Mechanical Engineering landmark by the American Society of Mechanical Engineers in 1980. The station was rebuilt and continued to operate until 1895, when it was finally decommissioned. By that time, engineers had designed power plants of much greater size intended to serve a larger area—Pearl Street was obsolete. The site of the building (the original structure has been demolished) was marked in 1917 with a plaque from the New York Edison Company. It can still be seen today.

Retrieved from "https://ethw.org/w/index.php?title=Pearl_Street_Station&oldid=157332"
Categories:
This page was last edited on 23 November 2017, at 06:45.
About ETHW
Policies and disclaimers