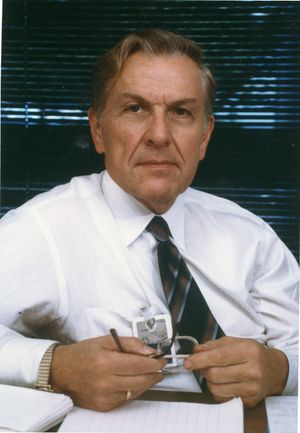 Merlin G. Smith was born May 12, 1928 in Germantown, Kentucky. He received the BSEE degree from the University of Cincinnati in 1950 and the MSEE degree from Columbia in 1957. During the Korean Conflict he served in a technical capacity in the Signal Corps Engineering Laboratories at Fort Monmouth, New Jersey.

Merlin Smith joined IBM in 1952 and participated in the early development of electronic computers. Subsequently, he was responsible for research and development projects in logic and memory technology. He was Engineering Manager for Large Scale Integration (LSI) in the early development of LSI, and he continues to be involved in the evolution of semiconductor technology. He was the Advanced Silicon Technology Laboratory's Program Manager for Systems Applications, and located at the IBM Research Division, Thomas J. Watson Research Center. Merlin has had a long dedication to the programs of the IEEE and the IEEE Computer Society. He joined as an AIEE/IRE Student Member in 1946. In 1978, he was elected to the grade of Fellow "for contributions to the development of large-scale integration." He has also received the Richard E. Merwin Award for Distinguished Service in 1983, and Outstanding Contribution Awards in 1985 and 1987 for Computer Society service.

Mr. Smith served as IEEE Computer Society President in 1977/78, Division VIII Director 1983/84, IEEE Executive Vice President 1985, and IEEE Vice President for Technical Activities 1986. Merlin has been a major contributor to the growing role of Societies within the Institute. He was a strong advocate of the application-oriented magazines and tutorial publications, instrumental in the founding of Computer Society Press, an organizer in numerous technical conferences, and one of the principals in the extension of Society programs into the software and applications areas. Merlin lived with his wife Elinore in Yorktown Heights, New York.

Retrieved from "https://ethw.org/w/index.php?title=Merlin_G._Smith&oldid=172913"
Categories:
This page was last edited on 25 January 2019, at 19:18.
About ETHW
Policies and disclaimers