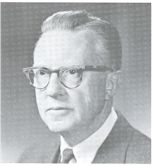 Edward W. Herold (IRE Associate, 1930; Member, 1930; Senior Member, 1943; and Fellow, 1948) was born in New York City on 15 October 1907, moved to New Jersey at an early age, and attended the Newark public school system. Developing an early interest in radio, Herold became a radio amateur while in high school. After graduation in 1924, he worked for several years (1924-1926) as a technical assistant at the Bell Telephone Laboratories, on picture transmission; at the same time, he became familiar with the television experiments under Ives in a nearby group. In 1927, he joined an electron tube company, E. T Cunningham, Inc., and that fall enrolled as a physics major at the University of Virginia in Charlottesville. After graduating in 1930 with a B.Sc. degree and a Phi Beta Kappa key, Herold joined RCA as a development engineer at Harrison, New Jersey. He earned an M.S. degree from the Polytechnic Institute of Brooklyn, New York, in 1942, and an honorary D.Sc. degree also from the Polytechnic Institute of Brooklyn, in 1961.

During the 1930s, Herold became known for the development of a number of receiving tubes and for his analyses of frequency converters and signal-to-noise problems. His self-designed television receiver of 1938 was copied by several of his colleagues, and many of his friends in northern New Jersey saw their first television in Herold's home.

Herold spent much of his career working for RCA. From 1930 to 1942, he worked at RCA's site in Harrison, New Jersey site, and from 1942 to 1959, he worked at the new RCA Laboratories at Princeton, New Jersey, where he became the Director of Electronic Research Laboratory. During World War II, he researched microwave electron tube problems. After World War II, he became head of a tube research group which, in 1948, started transistor research at RCA.

In 1949, Herold was asked to direct a corporate-wide "crash" program to develop a color television picture tube, a project which, up to that time had appeared to be close to impossible. In six months, several approaches had shown success, among them the shadow-mask tube of H.B. Law. The latter tube was first publicly demonstrated in March 1950 and made possible the adoption of the compatible color systems in use today. The shadow-mask tube is still the only type in use today, and is found in some 90-million color receivers throughout the world.

Herold became Director of one of the RCA Laboratories and, in the 1950-1952 period, this group exploited the alloy junction transistor by making thousands of units while others throughout the country were struggling to make tens or hundreds by the grown-junction process. The RCA success in devices led to a public demonstration in November 1952 of a large number of applications in almost every conceivable type of electronic apparatus, including the first all-transistor TV set.

During 1957-1958, Herold headed the RCA part of the team which built the first large nuclear-fusion research facility at Princeton University. In 1959, he left RCA and joined Varian Associates at Palo Alto, California, as Vice President of Research, where he organized and administered the Central Research Laboratory. In 1961, he was awarded the honorary D.Sc. degree by the Polytechnic Institute of Brooklyn. Returning to RCA in 1965, Dr. Herold joined the staff of the Executive Vice President of Research and Engineering, later becoming Director, Technology, for the Corporation. He retired from that post at age sixty-five, in 1972, and afterward acted as an independent consultant.

Herold made his career in research and development, specializing in electron tubes, semiconductor physics and devices, signal-to-noise problems; and plasma physics. He held forty-seven U.S. Patents and wrote forty-nine publications, including co-authorship of the book "Color Television Picture Tubes".

An early member of the Institute of Radio Engineers, Herold was elected a Fellow in 1948 for his contributions to the field of vacuum tubes. He was one of the founders of the Princeton Section, IRE, and was its Chair in 1949. He served on the IRE Board of Directors from 1956 to 1958, and on the Wescon Board from 1963 to 1964. Herold chaired numerous committees in IRE and IEEE over the years and had been particularly active in editorial matters, Convention technical programs and the Technical Activities Board. Herold has also been a member of the Department of Defense Advisory Group on Electron Devices, serving twice as its Chairman. He is also Chairman of the Board of Trustees of the Palisades Institute for Research Services, and is on the Engineering Foundation Board as one of the IEEE representatives. He was also a member of Phi Beta Kappa and Sigma Xi.

Herold received the 1976 IEEE Founders Medal "For his outstanding contributions to the electrical engineering profession at large, and in particular his insight and leadership in the development of color television."