IBM’s experimental “millipede” memory chip is being touted as a breakthrough in the fields of both computer memory and nanotechnology. Announced in 2002, the chip combines the older techniques of MEMs (micro-electro-mechanical systems) with an Atomic Force Microscope (AFM) and is being developed at IBM’s Zurich research laboratory by a team that includes Gerd Binnig (inventor of the AFM) and engineer Peter Vettiger. 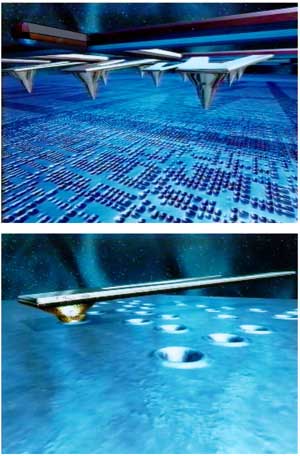 An animated view of the Millipede nanomechanical storage device illustrates how an individual tip creates an indentation in a polymer surface (bottom) and how a large number of such tips are operated in parallel (top). Courtesy of IBM Zurich Research Laboratory. Unauthorized use not permitted.

The millipede chip grew out of the fact that AFMs probe tips are just a few atoms wide; so narrow, in fact, that they are used to “feel” the surface of individual atoms or push them around. IBM engineers realized that the tips could also be used to indent a suitable surface, making it possible to inscribe digital data. Using a thin sheet of plastic, the probe tips are heated and pressed into the surface for a fraction of a second, leaving a tiny indentation just a few nanometers wide. These indentations can be very closely spaced, allowing a great deal of information to be written on a small surface area. The surface can also be “erased” by reinserting the heated probe tip, in effect melting the pit surface, which then springs back to its original shape. IBM engineers then designed an array of many probe tips, each mounted on MEMs-like structures that could move them up-and-down to write and erase, and also side to side to access various points on the plastic surface. The moveable cantilever structure is etched out of a layer of silicon so thin (just 20 nanometers or so) and thus is very flexible. The prototype chip demonstrated in 2002 had 1,024 tips, resembling the “thousand legs” of the millipede insect, and researchers estimate that a much more complex version of the chip could store up to a trillion bits on a square inch of plastic. The technology is not unlike the earliest days of computing, when digital information was written and read in the form of holes punched in paper cards; of course in the 1950s those cards were much larger, but the principle was similar.

The second-generation chip was slated to be demonstrated in 2003 and IBM announced that it would become a part of cell phones and PDAs in 2005. However, by 2005 IBM was still in the prototype stage, demonstrating an improved millipede chip early that year and saying that regular production was still two years away. However, in the interim, engineers have made significant strides, increasing the number of probe tips to 4,000 and providing a terabyte of storage on a single chip. If they succeed, the millipede may make a huge impact on the memory chip industry...or, perhaps, a very, very small impact.

Retrieved from "https://ethw.org/w/index.php?title=IBMs_Millipede_Memory_Chip&oldid=154592"
Categories:
This page was last edited on 12 April 2017, at 13:50.
About ETHW
Policies and disclaimers