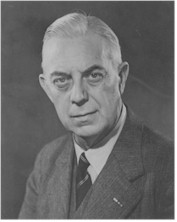 Balthasar Van der Pol was born on 27 January 1889, at Utrecht, Holland. He studied experimental physics with J. A. Fleming and Sir J. J. Thompson in England, and was to H. A. Lorentz in the Conservator Physical Laboratory, Holland. He received his Doctor of Physics degree from Utrecht in 1920.

Van der Pol initiated modern experimental dynamics in the laboratory during the 1920s and 1930s. He investigated electrical circuits employing vacuum tubes and found that they have stable oscillations, now called limit cycles. When these circuits are driven with a signal whose frequency is near that of the limit cycle, the resulting periodic response shifts its frequency to that of the driving signal. That is to say, the circuit becomes "entrained" to the driving signal. The waveform, or signal shape, however, can be quite complicated and contain a rich structure of harmonics and subharmonics.

In the September 1927 issue of the British journal Nature, Van der Pol and his colleague van der Mark reported that an "irregular noise" was heard at certain driving frequencies between the natural entrainment frequencies. By reconstructing his electronic tube circuit, we now know that they had discovered deterministic chaos. Their paper is probably one of the first experimental reports of chaos -something that they failed to pursue in more detail.

Van der Pol built a number of electronic circuit models of the human heart to study the range of stability of heart dynamics. His investigations with adding an external driving signal were analogous to the situation in which a real heart is driven by a pacemaker. He was interested in finding out, using his entrainment work, how to stabilize a heart's irregular beating or "arrhythmias".

Van der Pol was one of the founders, and for many years president, of "Het Nederlandsch Radiogenootschap," and member of the Union Internationale de Radio Diffusion, and he Union Radio Scientifique Internationale. He joined the Institute of Radio Engineers in 1920, and became a Fellow in 1929. He received the IRE Medal of Honor in 1935 "For his fundamental studies and contributions in the field of circuit theory and electromagnetic wave propagation phenomena." Van der Pol passed away in 1959.

Retrieved from "https://ethw.org/w/index.php?title=Balthasar_Van_der_Pol&oldid=155932"
Categories:
This page was last edited on 9 August 2017, at 18:08.
About ETHW
Policies and disclaimers