The TMS1802 was one of the first microcontrollers. A microcontroller is a computer on a chip that is used in most of today's appliances, entertainment devices, cell phones, and automobiles. Courtesy: Texas Instruments. 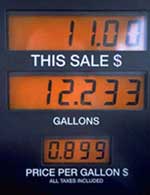 One of the first applications of microcontrollers was in gas pumps.

In the world of computers and microelectronics, much fan fare goes to the microprocessor. But there’s another important invention that deserves some glory of its own: the microcontroller. The microcontroller is the computer chip that controls most of the complex electronic devices people use every day, from washing machines and coffee makers to the air bags and anti-lock brakes in cars.

In 1970 and 1971, about the same time Intel was inventing its microprocessor, Gary Boone, an engineer at Texas Instruments was working on a similar idea. At that time Texas Instruments was interested in making pocket calculators, and Boone designed a single integrated circuit chip that held nearly all of the necessary circuits to make a calculator (except for the keypad and display). This extraordinary breakthrough was given the rather humdrum name of the TMS1802NC, but there was nothing humdrum about the device. Five thousand transistors provided 3000 bits of program memory, 128 bits of random access memory, and could be programmed to perform different functions. While Texas Instruments believed that most sales would initially go to makers of calculators, it saw far-reaching possibilities for the new chip. With a little programming, it could be used to power electronic clocks, scales, and various types of meters. Although the microprocessor could be the basis of a much more powerful computer, it had to have a whole group of additional chips and circuits to make it work; at a minimum in needed memory chips, to use it with a printer, color monitor, sound card, or disc drive required even more chips. The microcontroller, on the other hand, was an independent device—a computer on a chip that performed a more limited range of functions but needed only minimal help from other chips and devices.

For that reason, the development of the microprocessor and microcontroller parted ways. Both were successful, but in terms of sheer numbers it was the microcontroller that sold the most. Even in the late 1970s, when the personal computer was still just a gleam in the eyes of a few guys who spent a lot of time in their garages and basements, sales of microcontrollers were rapidly accelerating. The low-cost of the microcontroller and its all-in-one approach made it economical to develop what are now known as “embedded” computer applications. Tiny computers could be built-in to nearly any kind of system or machine to give it added features. Some of those applications included microwave ovens, where the keypad, clock, and oven settings were monitored by a microcontroller, and gas pumps, where metering of the gasoline and the starting of the pump were handled by the embedded computer system. Today, microcontrollers are nearly everywhere—your home probably contains 20 or more. The latest automobiles may contain over a dozen. By the early twenty-first century, the microcontroller was by far the top-selling chip of any kind, with well over 4 billion sold per year.

Retrieved from "https://ethw.org/w/index.php?title=Microcontroller&oldid=154775"
Categories:
This page was last edited on 12 April 2017, at 13:52.
About ETHW
Policies and disclaimers