Milestones:Multiple Technologies on a Chip, 1985

Multiple Silicon Technologies on a Chip, 1985 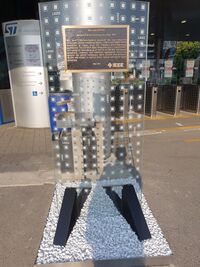 Plaque is at the main entrance close to ST security personnel who monitor entrance 24 hours a day, all days in a year. Very close as indicated there are public roads. Plaque 1: via C. Olivetti 2 Agrate Brianza (Italy) and therefore visitors do not need to be escorted by ST guards to look the plaque or to take a snapshot of it. STMicroelectronics Srl Via C. Olivetti 2, 20864 Agrate Brianza, Italy Google Maps plus code: H9C6+JX. The milestone plaque will be installed right in front of STMicroelectronics Srl Via C. Olivetti 2, 20864 Agrate Brianza, Italy main entrance and lobby. It’s where employees, visitors and customers pass to get in to ST every day. It’s monitored continuously by ST personal 24h/7d by human resources and by security camera. It’s a public place, right outside ST inner perimeter. The site is of premier importance since where ST started with business activities of 55+ years history and culminated in mass-producing BCD devices.

Plaque 2: outside the entrance to the ST building on via Tolomeo 1, Cornaredo, Milan, Italy. 45.470882, 9.034128. The plaque will be mounted on a plinth facing the street. There is a guard post at the entrance who will be able to watch the plaque. This is a public road and therefore visitors do not need to be escorted by ST guards to look the plaque or to take a snapshot of it.

It’s protected by ST security human resources also with camera, 24h/7d. It’s public and easily accessibile from via C. Olivetti 2 Agrate Brianza, 20864 Italy. It can be easily reached from Linate Airport, close to Milan or from Milan itself. 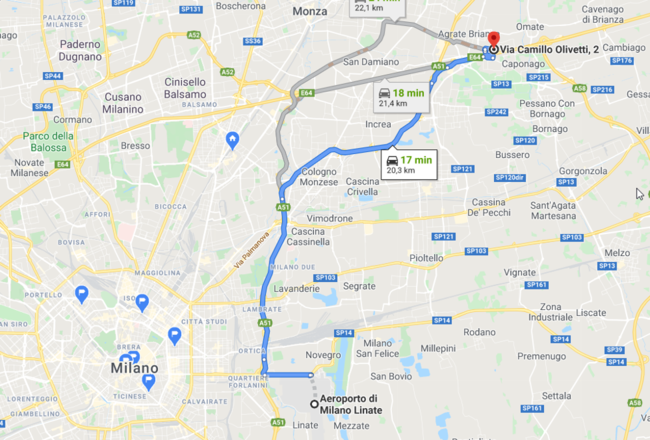 Summary of objectives and vision

2) To control such a power with logic, which implementation would scale with Moore law

5) To address a broad range of applications with reliable implementations

To meet such challenging objectives and long-term technology vision, ST since 1985 developed

1) A new integrated Silicon Gate Multipower BCD [1,2,4,9], that allowed the integration on a single chip of diodes, bipolar linear, complex CMOS logic, and multiple DMOS power functions with complex interconnections. The architecture of the process was chosen to optimize the power part, which generally occupied the most chip area. With the DMOS device, many other signal components have been obtained whose electrical and structural characteristics were in relation to manufacturing process.

Besides, the following characteristics have been achieved in the developed technology:

4) To use very efficient silicon gate isolated power DMOS transistors, having all contacts in the top surface and in place of bipolar power transistors. That gave the freedom to integrate higher number of DMOS transistors connected without constraints in a compact chip [4]. Moreover, Power DMOS shown no driving power in dc condition, and no secondary breakdown limitation.

7) Use of DMOS component as Power device secure hundreds output power without high dissipation overcoming high current heating that were obstacles to the miniaturization of power switching [4].

Power ICs were realized by using pure bipolar technologies for the audio amplifier market. These devices, mainly operating in switching mode, were severely limited by the poor efficiency and the thermal run-away effect of bipolar power transistors. This poor efficiency meant that a significant amount of power was dissipated inside the device. Since there was a limited dissipation capacity of an IC package, this represented a limitation on the available delivered power.

Another limitation was the poor density of bipolar logic: with the growing request of logic functions, the I2L approach was no more competitive due to its design complexity, high power consumption and limited shrink capability with the lithography.

Other processes used discrete-type DMOS structures where the lower surface of the die was the drain contact, so that two or more DMOS devices could only be placed on the same chip with the limitation constraint to have a common drain contact. Existing configurations were not feasible for complex connections and numerous power device integration, since featured drain on the bottom of the die where a single or common drain power transistors can be integrated [5]. This limited the freedom to design complex integrated BCD circuits. In [6] the core of the fabrication sequence was a metal gate CMOS process. Using that process, figure 3(b) of [6] shows the photomicrograph of a test chip which complexity was very simple. Other firms were focused on metal gate standard CMOS to which added Power MOS and bipolar. This was another key difference vs ST Silicon Gate power DMOS which was integration friendly with standard CMOS, bipolar transistors and diodes. As matter of fact Silicon Gate Multipower BCD introduced by ST become broadly adopted by many applications pushing the former to niche application. If the former would be used broadly then it couldn’t scale, couldn’t be cheap like the ST technology thus preventing it to be adopted into a broad range of applications like ST technology achieved. Those solutions, with Metal gate Power MOS architecture presented in the early phase of BCD technology had short life and disappeared up to the point today they are no more used and not being compatible with CMOS silicon gate evolution.

This technology allowed the integration on the same chip of more power DMOS devices isolated from each other, together with Silicon gate CMOS and Bipolar transistors (fig.2), having all the contacts on the top surface. With ST Silicon gate Multipower BCD, hardware designers were free for the first time to integrate any number of DMOS power transistors connected in any way including bridge configurations as said in [4]. Differently to metal gate, ST chose self-aligning silicon gate to achieve logic scaling with Moore law. As result ST first implementation L6202 shown in figure 6 [1], figure 2 in [4], figure 4 in [8] was more complex and sophisticated vs the existing in figure 3(b) in [6].

At the same time ST worked on proving the technology with hardware implementations. On 1984 the first power MOS chip has been developed and was reliably working in the range of 60V, with four Power DMOS connected in H bridge configuration (Fig.3 project code name was B4309, see internal report [7] and [2]). 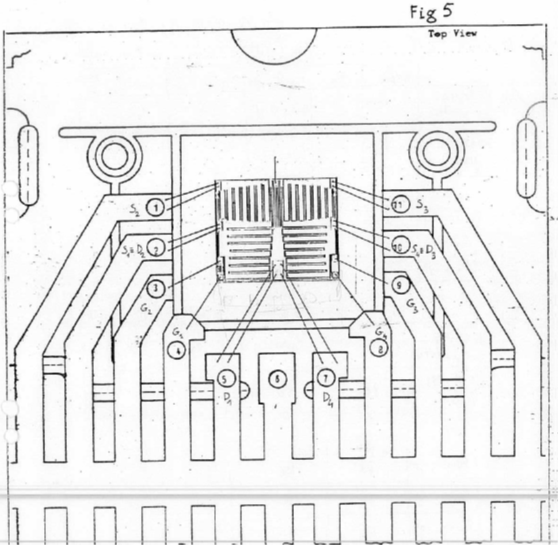 Next on 1985 [1, 3, 8, 9, 10, 11, 16] ST, developed the first integrated circuit: a switching bridge control system for DC and stepping motors (60V, 5A) working at 300KHz with high efficiency. It used Silicon gate Multipower BCD technology just created. The powerful, monolithic integrated circuit was named L6202, internal code name U002 (figure 4). Since the power dissipation was only 1.5W when the output current was 1.5A, the device was working at this level in a standard D.I.P. package with great advantages in terms of cost (no heatsink) and compactness. 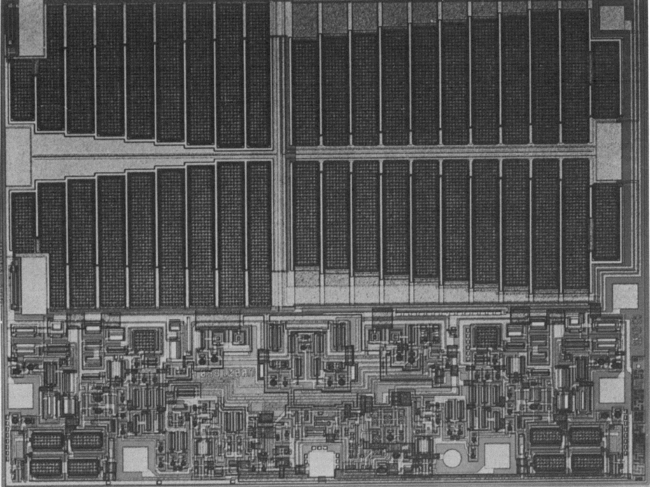 At the same time ST designed for comparison a bipolar bridge with identical power performances [4]. Both chips operated on 48V supplies and delivered 1.5A continuous output current. But while L6202 was assembled in a DIP package and needed no heatsink, its bipolar counterpart needed a power package and a hefty heatsink. Eliminating this heatsink by L6202 was a great demonstration of the importance of reduced dissipation in power ICs. Patent was also granted [ref. Patents 1, US 4,949,142].

This IC is still in production today, same name, after 35 years as well as many its derivatives [12].

On 1987 ST Silicon gate Multipower BCD technology was chosen by a top Car parts manufacturer [20] to address ICs for Automotive applications in the field of Power Train, Safety and Body. This cooperation is still running after 33+ years [13, 14] 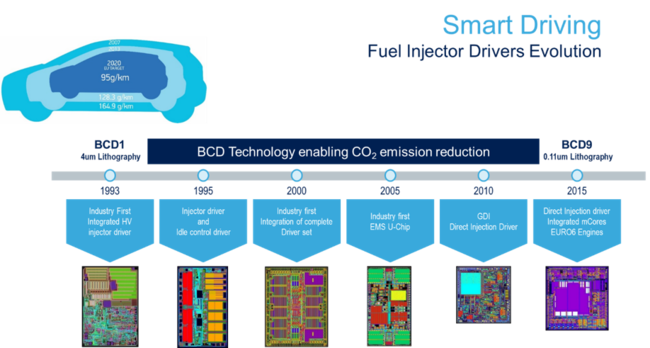 All along the years Silicon gate Multipower BCD technology has confirmed its flexibility to differentiation, voltage capability extended up to 1200V, compatibility with various solutions of NVM, precise passive components (Thin Film Resistor, etc.) and recently even integration of Galvanic isolation (6KV) That has widened the application fields: industrial, cellular, car electrification, many others. with more than 30B units delivered on the market by ST [15]

The ST innovation, which has been outlined in this IEEE Milestone proposal and which has significantly advanced the technologies available at that time, can be concisely summarized as follows:
1) The very 1st silicon gate integration of DMOS/CMOS/Bipolar/Diodes on 1984, [2]
2) First proof with L6202 more sophisticated than existing therefore setting the state of art on 1985. [3]
3) Free connectivity of power MOS for the first time [1, 4]
4) High power management with low dissipation and high efficiency [1]
5) Self-aligning silicon gate Power DMOS to secure compatibility with CMOS logic scaling with Moore law, thus allowing micro controllers integration. [1]
6) Modular and scalable technology platform approach open to integrate nonvolatile memories to address diversified applications [1, 4]
7) Very fast switching speed, no driving power in dc condition and no secondary breakdown limitation. [1, 4, 7, 8, 9, 10]
8) No external components needed to achieve low cost and broad adoption [1, 4]
9) High precision analog performance [1]