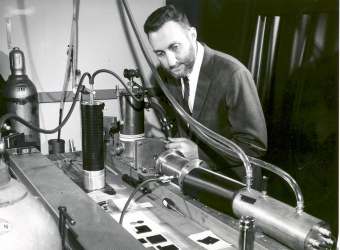 This Electronics Research Center study of the molecular properties of liquids was conducted using laser technology.

Lighting has been one of the earliest applications of electric power. The natural properties of electric lighting are visible in lightning, and these ideas were utilized in the early 19th century for arc lighting, a system which creates a spark between two conductors, producing a great deal of light. Sir Humphrey Davy made a famous demonstration of arc lighting in 1809, and arc lighting would be implemented in larger scales with the advent of the generator. The first practical installation was at the South Foreland lighthouse in England in 1858, and the Jablochkoff candle would be invented in 1870. Arc lighting would eventually be replaced by incandescent bulbs, invented by Thomas Edison in 1879.

Pages in this category deal with all aspects of lighting and optics, which includes the laser, or Light Amplification by the Stimulated Emission of Radiation, a focused beam of light which has many applications in modern technology. Fiber optics, media which transmit laser light along glass fibers, have played a huge part in today's communication industry, and are vital to the functionality of the internet.

The following 14 files are in this category, out of 14 total.

Retrieved from "https://ethw.org/w/index.php?title=Category:Lasers,_lighting_%26_electrooptics&oldid=102463"
Category:
This page was last edited on 22 July 2014, at 16:34.
About ETHW
Policies and disclaimers