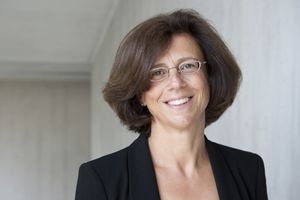 An IEEE Fellow and a pioneer in the field of ultrafast lasers, Ursula Keller has revolutionized photonics and enabled important scientific and industrial applications in physics, chemistry, and biology. Keller developed the semiconductor saturable absorber mirror (SESAM) for generating ultrashort pulses, which transformed femtosecond lasers from complex devices only used by specialists to reliable instruments suitable for use in any general-purpose scientific laboratory and industrial applications. Most ultrashort lasers today utilize her SESAM mode-locking technology for optical communication, precision measurements, microscopy, ophthalmology, and micromachining applications. The laser pulses produced using SESAM are very effective for eye and cancer surgery as they do not heat the material that they strike including cell tissue. Her work has also enabled the optical frequency comb revolution and the invention of the attoclock to resolve electron tunneling a highly debated topic ever since the early days in quantum mechanics. Keller’s development of carrier phase stabilization and frequency comb technology during the 1990s was integral to Hänsch and Hall’s development of laser-based spectroscopy that garnered the 2005 Nobel Prize in Physics.

Ursula Keller grow up in rural Switzerland during the 1960s and 70s. Her severe dyslexia made it difficult for her to do well in languages classes, preventing her from getting into the top secondary schools in Switzerland. She had the choice of training for vocational jobs in other schools but with her exceptional skills in math and science, she transferred to the top school ‘Gymnasium’.

Although she wanted to do physics theory, but warned of the difficulty getting a job, Keller decided to do experimental physics. She went on to study physics engineering at the Swiss Federal Institute of technology (ETH) in Zürich. A professor at ETH, after being impressed with her grades, suggested she spend some time in the UK to learn English. Keller spent time at Heriot-Watt in Edinburgh where she took some English classes.

At ETH, Keller applied for the Fulbright fellowship and after graduating top of her class, she won a full five-year fellowship which allowing her to travel and be funded. I was accepted at every US university I applied to but decided to go to Stanford University in California. At Stanford, she switched to pure physics and studying applied physics for her master’s and doctorate. Keller decided to study experimental laser physics for the subject of her PhD.

In 1989, she went on to work at Bell Labs in New Jersey where she developed and patented SESA.In 1993, Keller returned to ETH as the school’s first female full professor of physics, becoming director of the Swiss National Research Centre for Ultrafast Molecular Sciences and Technologies. Noting the lack of support for women at the university, she founded the ETH Women Professors’ Forum as a support network to help female researchers advance their careers and their research. Keller also serves as a director of the Swiss research program NCCR MUST in ultrafast science.

Retrieved from "https://ethw.org/w/index.php?title=Ursula_Keller&oldid=179126"
Categories:
This page was last edited on 7 April 2020, at 22:29.
About ETHW
Policies and disclaimers