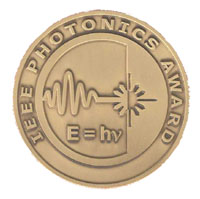 The IEEE Photonics Award was established in 2002.

Photonics is defined as the science and technology of generating and harnessing light and other forms of radiant energy whose quantum unit is the photon.

It is awarded for, but not limited to: light-generation, transmission, deflection, amplification and detection and the optical/electro-optical componentry and instrumentation used to accomplish these functions.

Recipient selection is administered through the Technical Field Awards Council of the IEEE Awards Board.

Retrieved from "https://ethw.org/w/index.php?title=IEEE_Photonics_Award&oldid=187540"
Categories:
This page was last edited on 9 February 2022, at 20:15.
About ETHW
Policies and disclaimers